So you thought that Biden is bringing back every single American from Afghanistan, you’ve been lied to 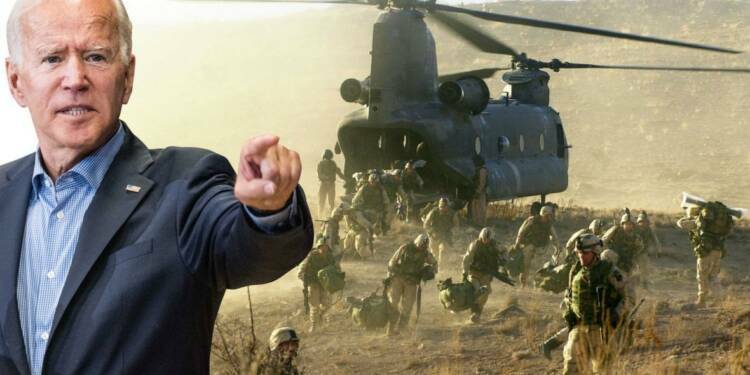 On April 14, Biden said that he would withdraw 2,500 American troops stationed in Afghanistan and thereby ending his country’s longest ongoing war.  The troops are to be brought back on 11 September 2021. This is true and 6,000 NATO troops will also be withdrawn. But what Biden didn’t tell you is that 18,000 Pentagon military contractors are going to stay back in Afghanistan, still fighting the long and bloody war.

Every American must take note- the Afghanistan war has not ended. Biden is only privatising and downsizing it, apart from making American involvement highly covert. So, why has the war not ended? Well, the fact remains that Biden is the man of the deep state. Yes, the same deep state which has profiteered massively out of the Afghanistan war. So, this war-loving lobby in Washington DC wants Biden to continue the deadly war.

And why is Biden pretending? There are two simple reasons- one, Americans are fed up with the number of troops who have lost their lives fighting a far-away war in an Asian country. Secondly, Trump had struck the Afghan peace deal and had announced the withdrawal of US troops before Biden came to power. So, Biden never really had the option of saying that he won’t let the troops come back.

In order to mislead Americans, Biden only made a few emotional remarks and also decided to set a very symbolic date for bringing back the remaining 2,500 US military troops- 11 September 2021. The US President also said, “War in Afghanistan was never meant to be a multigenerational undertaking.”

He added, “We were attacked. We went to war with clear goals. We achieved those objectives. Bin Laden is dead and al Qaeda is degraded in Afghanistan and it’s time to end the forever war.”

However, as per NYT, “Instead of declared troops in Afghanistan, the United States will most likely rely on a shadowy combination of clandestine Special Operations forces, Pentagon contractors and covert intelligence operatives to find and attack the most dangerous Qaeda or Islamic State threats, current and former American officials said.”

So, the Biden administration is going to leave a diversity of operatives and forces in Afghanistan. And these remaining American elements will continue to perform war-like functions of finding and attacking “threats”.

NYT also reported, “The United States maintains a constellation of air bases in the Persian Gulf region, as well as in Jordan, and the Pentagon operates a major regional air headquarters in Qatar.” Though not as practical and effective as ground combat, these bases can be at least theoretically used for launching long-range bomber assaults or armed drone missions.

So, while the regular troops come back to the US, the new arrangement comprising private military contractors, special operations forces and intelligence operatives serve the purpose of the war lobby and arms lobby. They still get to extract profits out of government spending on a war financed by the American taxpayers.

It is, in fact, quite meaningless on the part of Joe Biden to withdraw only the troops and leave the mercenaries behind. The Pentagon presently employs more than seven contractors for every serviceman or woman deployed in Afghanistan. This reflects how the US government has almost completely outsourced the Afghanistan war to private mercenary companies, in order to make Americans believe that the war is ending.

Despite the formal withdrawal of troops, the US Special Forces operatives and CIA personnel are supposed to continue the secret war in Afghanistan that involves training tribal elements and proxies in assassination and Phoenix-style snatch and grab missions. These American personnel are poised to stay back in Afghanistan despite the formal withdrawal of the troops.

The big message that every American must understand is that they have been lied to. Please understand- the Afghanistan war hasn’t ended and the taxes paid by an average American will still be used in financing US operations in the war-torn country.

Joe Biden has lost the first big global war that he started. Putin is the clear winner

Hours before the BRI was cancelled, China tried to placate Australia, but its attempts terribly failed