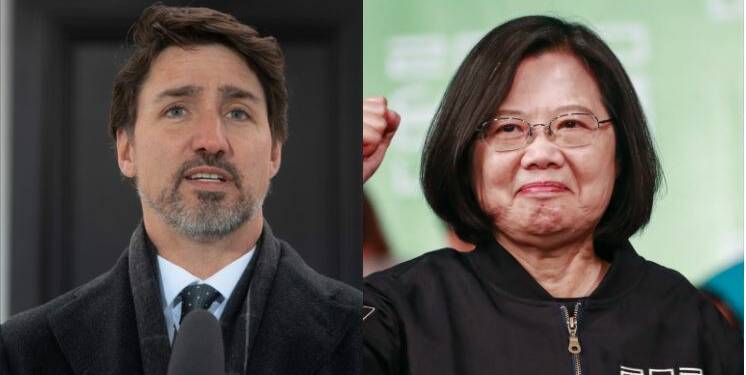 Canadian Prime Minister Justin Trudeau might be China’s stooge, but the Canadians themselves have no plans of making their nation a Chinese Client State. In a huge setback to Trudeau and Chinese President Xi Jinping, Canada’s Halifax International Security Forum (HFX) is giving its top honour-  John McCain Prize for Leadership in Public Service to Taiwan’s President Tsai Ing-wen.

HFX is proud to announce the winner of the 2020 John McCain Prize for Leadership in Public Service. https://t.co/mXZO07sbXy

HFX is actually making a big deal out of the announcement to facilitate Taiwan’s President, despite all the pressure coming from the Trudeau government and the Chinese Communist Party (CCP). Forum’s President Peter Van Praagh said, “President Tsai is an inspiration and an example to freedom loving people everywhere.”

Praagh added, “Her courage and her fortitude in defending her people against the Chinese Communist Party’s aggression are precisely the qualities that the John McCain Prize was designed to recognize.”

The HFX President also disclosed that the award would be given in person to Tsai at a ceremony to be held “in due course.” In fact, a video has been released by the HFX that describes the Taiwanese President as “another champion of freedom.” Much to Chinese President Xi Jinping’s chagrin, the video also features news clips describing Tsai as the strongest female leader in the Chinese-speaking world.

In one clip of the speech, Tsai can be heard saying, “I want to assure people that we will not escalate the confrontation, nor will we give in.”

The latest announcement by HFX has left the Trudeau government scrambling for cover, whereas China is fuming about how a Canadian entity would recognise Taiwan’s struggle against Chinese belligerence. Meanwhile, the Trudeau government, which faced criticism over reports of putting undue pressure on HFX in the Canadian Parliament, has gone into denial mode. Canada’s Defense Minister has conveniently denied that the government levelled any pressure at HFX.

In fact, the said reports once again allowed Canadian conservatives to slam Trudeau for failing to confront China over its belligerence and human rights violations. Canada’s House of Commons also passed a non-binding motion supporting Halifax Forum’s decision to facilitate President Tsai with the top award.

However, Beijing has failed to digest the insult that it is facing from the leading Canadian Security Forum. It has blasted Ottawa for supporting HFX.

Till now, Canadian Prime Minister Justin Trudeau was busy grovelling before Beijing, even though two Canadians are presently in Chinese detention and have become victims of Beijing’s infamous “hostage diplomacy”. However, the HFX award to Tsai and Trudeau’s inability to intimidate the prestigious Security Forum is bound to drive a deep wedge between the Chinese and Canadian governments.

At the end of the day, the HFX has managed to withstand all the pressure which was being mounted on it. While Trudeau is busy kowtowing to Beijing’s ‘One China Policy’, the Halifax Forum has managed to uphold democratic values and Taiwan’s right to self-determination in face of Chinese aggression.

China is trying to be a major space power, but its irresponsible third-world tech poses a great danger to the world