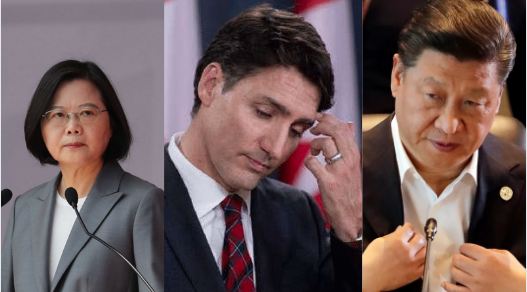 The organisers of one of the world’s most prestigious security conferences are embroiled in a tense diplomatic standoff between the Canadian government and China over the John McCain award set to be given to Taiwan‘s president.

More than the diplomatic uneasiness, it is Justin Trudeau’s well-documented love for China that is creating tensions with Halifax. It is a well-known fact that Justin Trudeau has a great bonhomie with the Chinese leader Xi Jinping. Canada is compromised in favour of communist China.

The current standoff, which has gone unnoticed, has strained ties between the Halifax International Security Forum and the Canadian government, which is a major sponsor of the event.

According to multiple sources familiar with the matter, the forum’s organisers agreed to award Tsai Ing-wen, Taiwan’s president, the John McCain Prize for Leadership in Public Service late last year. Cindy McCain, a member of the forum’s board of directors, approved Tsai receiving the prize named after her late husband.

Read More: 52% of Canadians are against China, but Justin Trudeau is still spineless. What is he hiding?

When Canadian officials heard of the forum’s plans, they made it clear that if Tsai received the award, the Canadian government would withdraw its support — and funding — for the event. HFX is undecided about how to proceed. The situation seems to be on hold for the time being.

“HFX has not yet announced the winner of the 2020 John McCain Prize for leadership in public service. We look forward to making the announcement and conducting a presentation event at an appropriate time, given the challenges that the Covid-19 pandemic presents. President Tsai of Taiwan is a well respected international leader, the first female president of Taiwan, and a strong global advocate for democracy. She would certainly be an ideal fit for this award. At this time, we have no further announcements to make.”

The Trudeau government seems to be uneasy about the situation. After tensions erupted in December 2018, when Canadian authorities detained a senior Huawei executive on behalf of the US, Ottawa has shied away from provoking Beijing. China detained two Canadians days later in apparent retribution and has since charged them with espionage.

The Conservative Party’s, Canada’s official opposition leader, Erin O’Toole, has repeatedly tried to portray Trudeau as too friendly with China and challenged him to stand up to Beijing.

“It’s disappointing but not surprising to see the extent to which the Trudeau government will go to secretly support the Communist Party of China,” O’Toole wrote in an email Friday to POLITICO when asked about the Trudeau government’s ultimatum to the Halifax Forum on Tsai. “It begs the question of what else this government is doing in secret to support their friends in China that we don’t know about.”

The Five Eyes (intelligence) partnership is the strongest indication of the feasibility of the bonhomie between the two states. The conduct of Justin Trudeau and Jacinda Ardern, both of whom have become pro-China voices inside the Five Eyes, jeopardised the organisation’s ability to operate. The pro-China lobby in Canada has redoubled its efforts to free Huawei’s CFO Meng Wanzhou, and New Zealand is rife with Chinese influence. Although the Five Eyes was meant to lead the free world’s battle against communist China, it has devolved into a sad state where it can do little due to compromising members.

Moreover, Trudeau’s unspoken love for China and Chinese President Xi Jinping can also be seen from the fact that when in February, Canada’s Parliament voted overwhelmingly in favour of a motion declaring Beijing’s mistreatment of Uyghur Muslims a genocide. Trudeau himself and his 36 cabinet ministers abstained from voting on the symbolic motion.

Trudeau stands for the same Chinese Communist Party (CCP) which stole Canadian research and technology for finding a COVID-19 vaccine. This is what Canada gets from China. But Trudeau is Trudeau after all. He has squandered one opportunity after the other and Canada’s current opposition to award Tsai-Ing Wen with the John McCain award is another display of Trudeau’s China love.