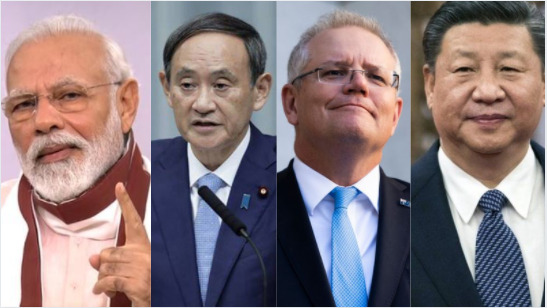 China keeps flexing its muscles left, right and centre, even as its President Xi Jinping runs a reign of terror from Beijing aimed at terrorising and injuring China’s neighbours. But now, the bully is being encircled by three of its enemies- India, Australia and Japan. These three countries seem to be working in coordination on a plan to surround China from three vulnerable sides- the East China Sea, the South China Sea and the Himalayas.

In fact, in line with the apparent strategy to encircle China, Japan has started rethinking its post-World War II tank designs. Japan’s Ground Self Defense Force (GSDF) has shifted its armour- and artillery-intensive up north for handling a possible Soviet invasion in the 1990s. Now, Japan is adopting a more mobile tank design which can help the Ground Defense Forces access Southwestern Japan at a moment’s notice in order to meet any new Chinese threat.

Japan’s bid to recalibrate its tank designs in response to China’s meteoric rise suggests that the three Indo-Pacific allies- New Delhi, Canberra and Tokyo, are looking to prioritise the creation of a three-front war situation against China. This helps each one of the Indo-Pacific allies improve their own security calculus apart from lending a sense of assurance to the other two allies.

So, how does it unfold geographically?

Let’s start with India- China’s Southern neighbour. A strong sense of China-focused military strategy is also visible in New Delhi. There is at least a temporary thaw in military tensions between India and its traditional enemy- Pakistan, which allows India to focus on China.

On the other hand, Sino-India military confrontation has been consistently on the rise for the past year. India is the only one of China’s many neighbours which shared deadly hostilities with the Chinese People’s Liberation Army last year. While India suffered 20 casualties, China suffered a disproportionately higher number of casualties.

Consequently, much of India’s military strategy concerns the China challenge. India has been on a road-building spree to ensure better access to the Sino-India border which is marked by the remote and lofty Himalayas. There is also greater stress on improving airfields and other infrastructure which can ensure a swift response by the Indian Air Force (IAF) in case of an escalation.

The Indian Navy too is chipping in with greater mobilisation near the Strait of Malacca- a strategic chokepoint connecting the Indian and Pacific Oceans. It carries high strategic importance given that China imports most of its energy needs through the Malacca route, and a large volume of Chinese exports also pass through this region.
On China’s North, we have already spoken about Japan’s attempt to redesign its tanks with special emphasis on countering Chinese belligerence. In fact, Japan has been spending heavily on its defence forces- a clear departure from post-War pacifism. Tokyo is looking to use its cutting-edge technology and high product quality in order to gain an upper hand over China.

In fact, Japan has been looking to develop pilot-less fighter planes and long-range missiles, entirely with the objective of taking on the paper Dragon. Of late, Japan and China have often engaged in military tussles even as Chinese vessels frequently intrude into Japanese waters near the Senkaku Islands. In light of such events, Japan is looking to acquire sufficient military muscle in order to strike back when push comes to shove.

As such, Japan is ready to take care of the East China Sea, apart from preparing its defence forces for the eventuality of a possible Chinese invasion into Taiwan.

Down South, Australia perceives Chinese belligerence in the South China Sea as detrimental to its own interests. Canberra looks at Indonesia and other Southeast Asian nations as its natural, regional partners. So, when Beijing tries to claim the entire South China Sea region and also uses salami-slicing tactics to undermine the sovereignty of countries like Indonesia, Vietnam and Malaysia, Canberra does get enraged.

In fact, Canberra views the Chinese monopoly over the South China Sea as a major security threat. So, the Australian Navy has frequently joined the US Navy in carrying out Freedom of Navigation Operation (FONOP) exercises in the region. Canberra’s resolve to push back against Chinese hegemony in the South China Sea is bound to frustrate and overstretch the Chinese PLA Navy. This is basically going to take care of China’s Southeast and Eastern boundaries.

The three-front war strategy which is clearly in the making has a strong deterrent effect against Chinese military aggression. As such, it can help mount sufficient military pressure on Chinese defences. Beijing would realise how the other two Indo-Pacific allies can exert diversionary pressures on the Chinese military if the PLA decides to push the envelope on any of the three fonts. India, Japan and Australia are thus exterminating Xi Jinping’s terror reign with a whole new strategy.