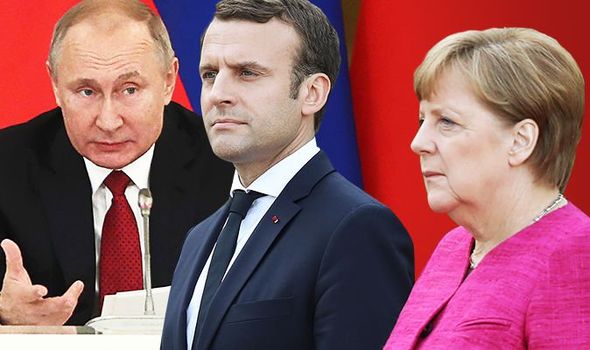 Remember how Joe Biden used to argue that Trump failed to uphold American leadership and that he would restore it if elected? However, just over three months into office, Biden has lost almost all US allies. In the early part of his tenure, the Biden administration failed to keep Israel and the Arabs in confidence. Later, even the Indo-Pacific allies got disillusioned with Biden and now even European allies are abandoning the US President.

We are talking about Germany and France- the two main European powers, who remained the closest US allies during the Cold War era. Yet, of late, Eastern and Central Europe have been sidelining Biden after realising that he was putting the region in danger of a major conflict with Russia in order to mount a smear campaign against Russian President Vladimir Putin. Now, Putin has once again outfoxed Biden by pulling Germany and France closer to Moscow.

Recently, Russia prepared a list of “unfriendly” countries which contained many Eastern and Central European countries like Ukraine, Poland, Estonia and the Czech Republic. The United Kingdom and the United States too were put on the list. But the names of two countries- France and Germany, were conspicuously missing.

Oleg Shein, a member of the Russian State Duma, explained why France and Germany have been excluded from the list of “unfriendly” countries. According to Shein, Moscow considered Paris and Berlin sufficiently independent of Washington, D.C. The State Duma member reportedly said, “they are a negotiating party for us.”

Ever since Biden came to power, he has been competing with Putin for influence in world affairs. Biden was telling the domestic audience that ‘America is back’, so as to give the impression of a unipolar world in which US leadership would once again dictate global affairs. However, Putin kept his cards close to his chest and ultimately caught the Biden administration napping.

The fact remains that while Biden was constantly speaking in terms of the alliance system that the US once enjoyed with France and Germany, the European leaders were pushing back against Biden’s anachronistic perception.

French President Emmanuel Macron was, in particular, sticking to his “strategic autonomy” policy. He remains more concerned with making the European Union (EU) more independent and self-sufficient rather than reverting to the Cold War-era alliance system with the US. Germany too didn’t get carried away with Biden’s warmongering against Russia.

In fact, both Berlin and Paris evinced interest in diffusing tensions with Moscow, and also showed a desire to find diplomatic solutions through engagement with the Kremlin. The cross-Atlantic alliance that Biden wanted to create against Russia has clearly failed to materialise. As such, a clear crack in the US-EU relationship is visible. Biden could not see it, but Putin saw it and he has also started to exploit it.

Read More: China is trying to steal Russian nuclear submarine designs and this won’t go down well with Putin

For Putin, the independence in foreign policy shown by Berlin and Paris is a leverage that he can use against Biden. By excluding Germany and France from the list of “unfriendly” countries and also describing them as a “negotiating party”, Russia is actually looking to engage with the two European powers.

Moscow is driving a deep wedge between the US and main European powers, by appreciating their independence from the Biden administration. Putin has, therefore, isolated Biden and no one really is ready to support his unnecessary and dangerous propaganda against Vladimir Putin.