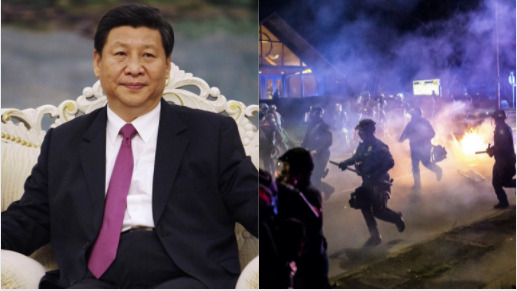 China is too afraid to take on the US military directly. So, it has evolved the concept of “unrestricted warfare”. Beijing wants to hurt the United States of America, without suffering any collateral damage. And how should China do it? Well, it seems supporting violence related to Black Lives Matter (BLM) was China’s best bet.

The Chinese Communist Party (CCP) was unusually excited about the violent BLM protests right from the word go. Even now, when the unrest over racist divisions in the US has subsided, China is trying to flare up the issue all over again.

China’s State media publication CGTN has recently published an op-ed which openly promotes the “Defund the Police” campaign. The op-ed states, “Not until policing is seen for what it is, a tool to maintain an unequal social order and not an institution sworn and committed to public safety, can we begin to get solutions that move us in the direction of justice.”

The CGTN op-ed actually reduces Police officers to slave patrols. It states, “It’s important to remember the origins of modern United States policing. Many American observers make the connection between police and slave patrols. What’s sometimes missing in this observation is the function of slave patrol as a labor and social hierarchy question. Those who claimed humans as property were incentivized to ensure those humans would not flee. This created a job for overseeing and policing enslaved workers.”

The op-ed concludes, “To demand accountability and justice from policing would be to abolish policing as we know it.”

The latest CGTN write-up only corroborates China’s intentions of inflaming unrest in the US by backing campaigns like “Defund the Police”. Yet, when the US was facing arson, vandalism and riots last year, China did get blamed for sponsoring such violent activities.

Heritage Foundation had published a report last year which claimed that Black Futures Lab, an initiative founded by Black Lives Matter (BLM) co-founder Alicia Garza, had described itself on its website as a “fiscally sponsored project of the Chinese Progressive Association.”

Anyhow, NYT fact-checked Gonzalez while arguing that he “conflated two nonprofits with the same name.” NYT claimed that “a cursory search of tax records” revealed that it was the Chinese Progressive Association in Boston, which supported China’s interests. NYT claimed that there was no connection between CPA in Boston and CPA in San Francisco.

Yet, Gonzalez fact-checked the NYT fact-checker itself. He claimed that San Francisco and Boston versions of were “founded by the same militant Marxist outfit, and their leaders, together with those of the New York CPA, collaborate through membership in leftist networks.”

Chinese State-run media, Foreign Ministry and Chinese social media handles had rallied behind violent activities in the US. In fact, a video had gone viral on social media of men who set fire to St. John’s Church (Church of the Presidents) shouting orders in Mandarin language. A Chinese Foreign Ministry spokesman had also called violence in the US “a beautiful sight”.

For China, targeting divisions in American society is an easy way out to achieve its geopolitical goals and domination ambitions. China doesn’t believe in hardcore kinetics and it is actually using racist violence as a weapon to bully the US. Meanwhile, a weak President in the White House, who rose to power on the back of anti-racism propaganda, is unlikely to hit back at Beijing for its provocative actions.