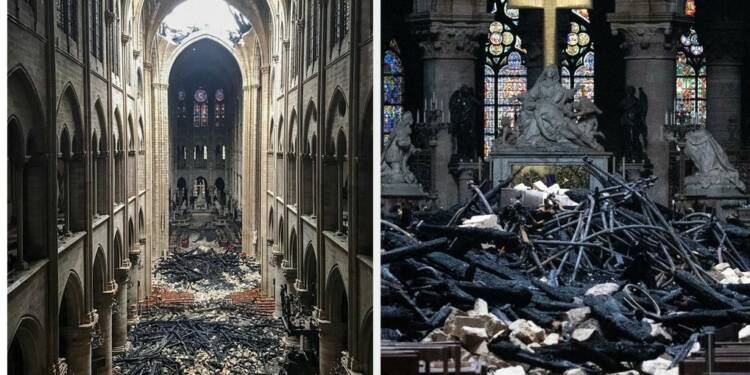 According to a French expert on France’s religious heritage, “one mosque is erected every 15 days in France, while one Christian building [church or monument] is destroyed at the same rate.”

The president of the Observatoire du patrimoine religieux (Observatory of Religious Heritage) in Paris, Edouard de Lamaze, is warning the French media about the “gradual disappearance of religious edifices in a country” that has long been referred to as the “eldest daughter of the Church.”

His warning came in the aftermath of an April 15 fire (“deemed accidental”) that destroyed the 16th-century Church of Saint-Pierre in Romilly-la-Puthenaye, Normandy, northern France, exactly two years after the fire that destroyed much of Paris’ famous Notre Dame Cathedral.

The majority of the monuments being demolished are Catholic. In France, where Catholicism still has a “large majority,” there are approximately 45,000 Catholic “places of worship.”

In an interview with Catholic News Agency, Lamaze explained his concern that in addition to one religious building disappearing every two weeks — by demolition, transformation, destruction by fire, or collapse — two-thirds of fires in religious buildings are due to arson. “Although Catholic monuments are still ahead, one mosque is erected every 15 days in France, while one Christian building is destroyed at the same pace,” Lamaze said.

“It creates a tipping point on the territory that should be taken into account.” In the interview, Lamaze shared his concern that on an average more than two Christian monuments are being targeted every day. Two-thirds of these incidents concern theft, while the remaining third involve desecration, according to Lamaze.

According to data from France’s central criminal intelligence unit, there were 877 attacks on Catholic “places of worship” in 2018. “These figures have multiplied fivefold in only ten years,’ Lamaze said, noting that 129 churches were vandalised in 2008…. Currently, 5,000 Catholic buildings are in danger of being demolished.” Lamaze blamed this state of affairs on the “deep negligence” of public authorities, noting that only 15,000 Catholic sites are “officially protected as historical monuments,” while the remaining 30,000 are “practically left to decay.”

Islamist extremism is on the rise in France. The French government under the leadership of French President Emmanuel Macron has been cracking down on the same. But even with all the action, the French people do not feel that enough work has been done to address the issue.

On April 30th TFIGlobal reported that a letter had been published in the right wing journal Valerus Actuelles. The letter warned the French government of a threat of civil war which could erupt if the Islamist extremism is not kept in check. The letter was signed by 20 retired French army generals and a horde of current French servicemen.

The generals predicted that if nothing is done to address their concerns, there will be a sudden “explosion,” necessitating a military coup to overthrow the government. “There is no time to waffle, or tomorrow civil war will end this growing chaos, and the dead, for whom you will bear responsibility, will number in the thousands,” they said.

Following the letter, another letter emerged which had the backing of almost 130,000 French citizens denouncing the French government’s ability to tackle the rising extremism.

But with every such attack on religious institutions in France, Islamists are digging their own grave. With each new assault, Emmanuel Macron’s resolve to combat Islamist extremism grows stronger.