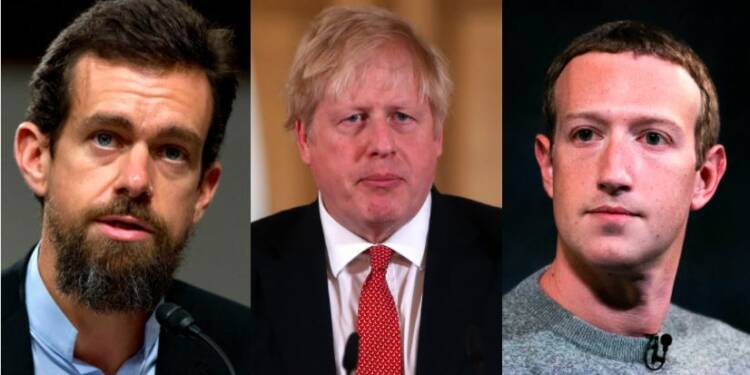 The United Kingdom, under the leadership of Boris Johnson, could give a severe jolt to Big Tech. On Wednesday, Britain disclosed that a planned new social media law would impose hefty fines of up to 10 per cent of the total turnover or $25 million against social media companies, which fail to weed out online abuses such as racist hate crimes. Not just fines, the bill also proposes criminal action against senior managers of such companies.

The Johnson government said the Online Safety Bill, as the proposed law is called, also seeks to protect the right to freedom of speech and expression, apart from facilitating democratic political debate and protection of journalistic content. The Bill ought to be seen in light of the worldwide outrage against Big Tech censorship of former US President Donald Trump. Democratic countries have since grown vary of the Big Tech’s tendency to formulate their own norms regardless of domestic laws.

British Interior Minister Priti Patel said, “It’s time for tech companies to be held to account and to protect the British people from harm. If they fail to do so, they will face penalties.”

Within the UK, tech firms have been criticised for doing too little to curb online abuse. Last month, soccer clubs and other sports organisations boycotted the Big Tech in a bid to highlight the emerging problem.

With the Online Safety Bill, a legal burden or duty to take care will be imposed on social media companies to promptly clamp down on illegal content. Objectionable content like hate crimes, harassment and online threats to other individuals will have to be taken down immediately. A legal mandate is thus being created in the UK, compelling social media giants to protect online users in the country.

In case terrorist material, suicide material and child sexual abuse are uploaded on their platforms, the social media companies will be required to remove and limit its spread, apart from reaching out to the authorities. Failure to comply will not only entail penalties and fines, but also a possibility of the block of access to the erring websites. Regulator Ofcom has been empowered to block access to such websites.

The British government said, “The draft Bill contains reserved powers for Ofcom to pursue criminal action against named senior managers whose companies do not comply with Ofcom’s requests for information.” It added, “These will be introduced if tech companies fail to live up to their new responsibilities.”

The Online Safety Bill is also going to legally compel social media companies into protecting free speech. Also, the companies will be required to reinstate unfairly removed material. This is specifically aimed at curbing the political biases of social media companies. In fact, social media platforms are barred from discriminating against specific political viewpoints. The government added that Ofcom will also hold such companies accountable for the arbitrary removal of journalistic content.

The UK has a clear message for the Big Tech – there is no place for bias, prejudice and arbitrariness in a democratic society. Johnson’s UK is cutting the Big Tech monopoly to size. If social media companies have to operate in Britain, they will have to follow British law or else the UK government will have no qualms in banishing them.