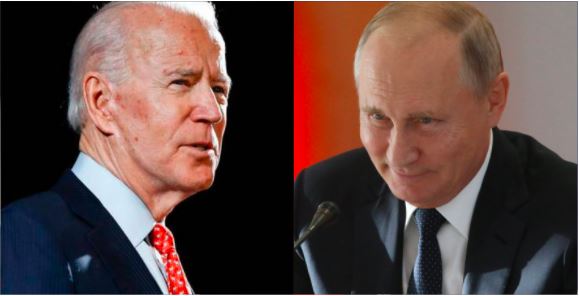 Biden remains obsessed with his Russian counterpart Vladimir Putin. The sitting US President also keeps blaming his predecessor for letting Russia become too strong and vows to revive American leadership. But now we see that Biden’s disastrous policies are handing Putin the keys of the global power structure. Today, Russian influence is growing everywhere – be it Eastern Europe, the Indo-Pacific, Turkey and most recently, Israel and Palestine.

Russia is fast replacing exclusive American leadership in Israel-Palestine mediation. Israel kept getting annoyed with Biden’s pro-Palestine policies, and therefore, it has shown willingness to drift towards Moscow. And to make matters worse, Biden has been overtly supporting the Palestinian cause, which has provoked skirmishes between the Israeli military and Hamas, a terror outfit that controls Gaza. Anyhow, Russia has seized the opportunity by putting all its weight behind Israel-Palestine negotiations.

For the past four years, Trump’s pressure desisted Hamas from attacking Israel. But around 1,500 rockets have been fired at Israel by the Gaza-based terror group since Tuesday. This is a direct consequence of Biden’s weak policy to let Israel fend for itself in face of external aggression. An irked Israel has responded with airstrikes, targeting Hamas leadership.

Meanwhile, Biden has issued a diplomatically balanced statement and his administration shows no signs of intervention, so as to support Israel – a US ally. Biden has quite literally left the region burning. Putin is too smart to ignore how Biden is creating a diplomatic vacuum when it comes to handling the escalation between Israel and Hamas.

So, Russia has urged the “quartet”- a group comprising European Union, the US, Russia and the UN, to intervene. Russian Foreign Minister Sergei Lavrov even held talks with UN Secretary-General Antonio Guterres in Moscow. At the press briefing, Lavrov said, “I think we came to a common conclusion that the most urgent task is calling a meeting of the quartet of international mediators: Russia, the United States, the UN and the European Union.”

Lavrov added, “And we trust the Secretary-General as the coordinator of the quartet.”

So, Russia is successfully eroding American leverage in the Israel-Palestine conflict by bringing in new international stakeholders. As such, Moscow plans to take up the leadership role as it is the one who brought up the proposal of engaging the “quartet”. The Kremlin is making it clear that the US is no longer the only power supposed to handle the Israel-Palestine conflict.

In fact, Russia itself enjoys a lot of leverage in the region. For many years, it has been critical of the US role in resolving the Israel-Palestine conflict and has consistently sought to stake claim over the mediator role.

As such, Russia is bipartisan and unlike the US, it doesn’t consider Hamas a terror group. At the same time, Russia maintains very close ties with Israel and therefore, the Kremlin enjoys sufficient flexibility in handling the regional conflict.

In fact, the Russian Foreign Ministry has issued a statement according to which Deputy Chairman of the Hamas political bureau Moussa Abu Marzouk made a conditional Israel-Palestine ceasefire proposal during a telephone conversation with Russian Deputy Foreign Minister Mikhail Bogdanov.

True, Israel might be happy about Russia’s Hamas relationship. However, the Netanyahu government in Israel does understand that Russia is a trustworthy partner and its Hamas relationship doesn’t come at the cost of its alliance with Israel. The rapprochement between Russia and Hamas might as well open doors for a lasting peace solution in the region, as Moscow seems to enjoy a better working relationship than the US with both Israel and Palestine.

Also, the Israel-Palestine conflict is merely illustrative. Biden has a tendency to upset his allies, or in several cases, to simply leave them unsatisfied.

Last month, the US President was resurrecting the Ukraine-Russia conflict, as a part of his smear campaign against Putin in Eastern Europe. However, Ukraine and other Eastern European nations felt let down when they realised how Biden was pushing them into a certain disaster by provoking Russia. Also, Biden showed a tendency of instigating conflicts from the sidelines instead of taking Putin head-on. Today, American standing in Eastern Europe is going down, while Moscow gets a chance of reclaiming its position in this part of the world.

In the Indo-Pacific also, countries like Japan and India feel that the US is maintaining a safe distance from them and giving a free pass to Beijing. So, New Delhi and Tokyo are also concerned about the possibility of a practical tie-up between Moscow and Beijing. Therefore, such Indo-Pacific powers are ready to keep Moscow in good humour, even at the cost of annoying Uncle Sam.

Similarly, Turkey- a NATO ally, has chosen Russia over the US. Biden and Democrats have ideological issues with Ankara, and the necessary fallout has been the crystallisation of a Turkey-Russia partnership that further reduces US influence in the Middle East.

Biden is thus giving Putin the key to a global power structure. Some of the most influential regional powers are choosing Putin over Biden, and it seems that the US President is going to unwittingly hand over global leadership to Moscow.