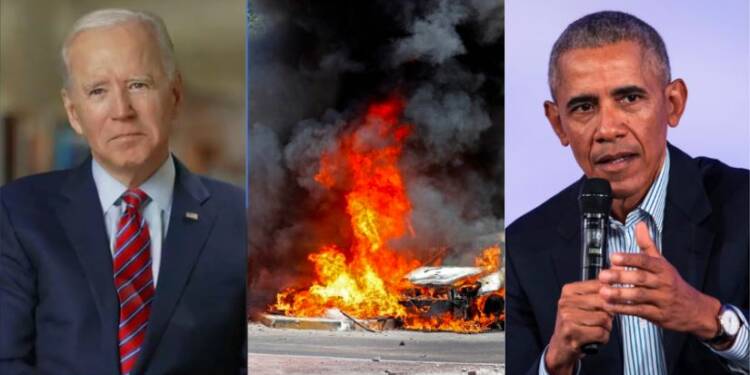 Looking at Joe Biden’s catastrophic foreign policies, one ought to feel that he is overwhelmed by his former boss, Barack Obama. From causing a deep rift in US-Israel ties to kneeling before adversaries like China and Iran, Biden has continued from where Obama left. Yet, Biden’s Israel policies may be even worse. Even Israel-hater Obama considered Hamas a terror organisation, but Biden simply keeps going soft on the terror group that runs Gaza.

The US designated Hamas a terror organisation during the Bush era. Even Obama did not deviate from this stance. He followed a condescending policy against Israel but never went as far as even remotely legitimising Hamas. However, in the ongoing Israel-Palestine conflict, Biden seems to show a sense of weakness against the Gaza-based terror group.

Till now, Hamas and other terror groups have fired over 1,700 rockets into Israel from Gaza. As such, this is the first time after 2014 that a major escalation has taken place between Israel and Palestine. While Trump’s unequivocal support had kept Hamas in check, Biden’s attempts to sideline the Jewish nation have emboldened the Gaza-based terror group.

In fact, Hamas understands that Biden cannot resist the pressure of far-left Democrats like Bernie Sanders, Alexandria Ocasio-Cortez and Ilhan Omar, who blame Israel for deaths in the region, effectively giving Hamas a free pass. The far-left Democrats fanned antisemitism and blurred the line between liberalism and Islamist extremism.

So, Hamas feels emboldened in the Biden era, something which didn’t really happen even under the Obama administration.

Biden administration’s Jerusalem remarks are directed at the violence in the Al-Aqsa compound earlier this week, as well as the contentious issue of a legal dispute regarding eviction of some Palestinian families in the East Jerusalem neighbourhood of Sheikh Jarrah.

Be that as it may, Jerusalem is facing a complex set of issues. But when hundreds of rockets are being rained towards Israel by Hamas, should the Biden administration be mixing up the two issues in a single statement?

Whether it is the White House readout of Biden Netanyahu conversation or Jen Psaki’s statement in the context of skirmishes between the Israeli military and Gaza, a tendency to link up Jerusalem with the upsurge in violence is visible.

By bringing up Jerusalem, the Biden administration could be clearly giving an excuse to Hamas for firing rockets at Israel. Hamas is using the weak reaction by Biden as a tool to search for greater legitimacy and recognition. It has even established contact with the Russian government in order to negotiate a ceasefire with Israel.

Biden’s Hamas policy is creating yet another disaster. It is subtly legitimising a terror group, and we won’t be surprised if the Biden administration ultimately agrees to negotiate peace with Hamas, something that even Obama did not do.