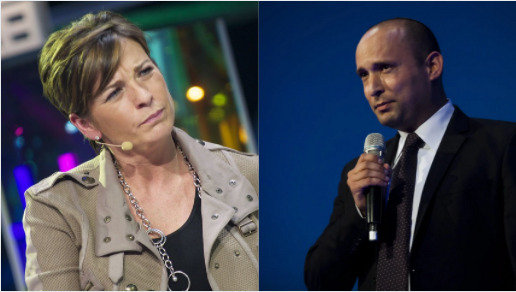 CNN tried to do what it does the best, and make Israel’s ex-Defence minister somehow brand Israel as the aggressor, but they got bashed really badly. Former Israeli Defense Minister Naftali Bennett retaliated against a CNN International anchor who said Israel was using disproportionate force and shooting indiscriminately at Hamas terrorists, asking what she would expect her country to do if it were under constant rocket fire. Bennett was told by CNN’s Becky Anderson that Israel could not possibly follow “international law” while responding to Hamas rocket attacks this week that struck and killed Israeli civilians.

“How can any strikes on Gaza, which is such a densely populated area, be targeted at military sites only?” she asked. “It doesn’t suggest that Israel is supporting international law … Perhaps you will admit that these airstrikes have been indiscriminate?” However, to this Bennet replied the most logically that such a biased question could be answered. “Absolutely not,” Bennett said. “Perhaps you suggest that we just lay back, let them shoot rockets at us, not shoot back, because they are hiding the rockets behind women and children. Would you do that, Becky? If your family was under fire, would you suggest that your government not defend you because they are hiding the guns and rockets behind civilians?”

Anderson did not react, instead turned the conversation to Israel’s superior technology and asking him to acknowledge that Palestinian civilians were the ones who suffered the most during the war. The unprecedented situation that Israel is facing has changed the political paradigm and the arithmetic of the country. During these testing times, many of the political parties and leaders, who were looking for ways to replace the current government of Benjamin Netanyahu, have now decided to come in support of the Prime Minister as they too have realised it is only he who can lead Israel in these war-like situations.

In a dramatic decision on Thursday, Yamina party leader Naftali Bennett ruled out forming a government with Yesh Atid president Yair Lapid to succeed Prime Minister Benjamin Netanyahu, citing the rioting and anarchy engulfing Israel as radical Arab and Jewish mobs vandalise and terrorise multiple cities. Bennett has renewed his talks with Likud due to the emergency situation, according to a political source who spoke on the condition of anonymity to The Times of Israel.

Read more: Israel realizes that only Benjamin Netanyahu can lead Israel in times of war

Israel is coming together in these unprecedented times and while the liberal-left media outlets like CNN are taking the side of Hamas and want to make out Israel as the bad guys, using an ex-Defence Minister of Israel did not turn out as planned. Anderson referred to Israel as “occupiers” and quoted organisations calling it an “apartheid” state during the interview, declaring Jerusalem had never been “more divided” than now.

To which he replied, “Actually, the city has been way more divided”. “When it was under Arab rule, Jews were forbidden to go to the Wailing Wall. While it’s under Israeli rule, and it will continue to be under Israeli rule, any Muslim, any Christian, any Jew, can enjoy the freedom of religion … Yes, there are tensions.”

Bennett later shared the exchange on Twitter, writing in Hebrew, “While Hamas is raining missiles on Israel, a CNN interviewer has accused Israel of using ‘excessive force.’ Here is my answer. Together we will win!” And this is the exact sentiment within Israel right now.