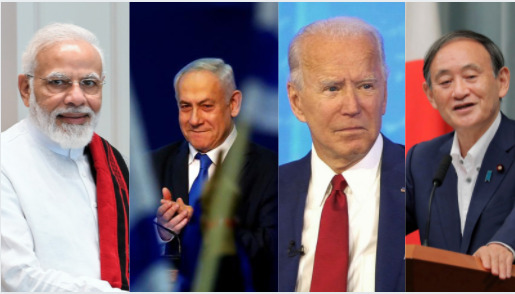 At the testing times for Israel when the world left-liberal media is trying to create an anti-Israel narrative, and at a time when the long-standing ally of Israel, the USA too is taking a middle-ground approach, India and Japan are showing the way with unequivocal support for Israel and its right to defend itself. Japanese State Minister of Defense Yasuhide Nakayama has posted a Twitter message that he sides with Israel over the escalating violence with Hamas Palestinian militants.

During the current escalation of violence between the Israeli military and Gaza-based terror group Hamas, the Western liberal ecosystem has begun a propaganda campaign against Israel, while New Delhi has come out in support of its ally Israel. India has denounced “all acts of violence,” but specifically the “rocket attacks from Gaza” that started it all. Now the Japanese lawmakers too have joined India in showing Joe Biden how things are done when a friend is in need and is being cornered. “Who fired rockets against ordinary citizens first? Our hearts are with Israel,” Nakayama said in a Twitter post Wednesday.

Nakayama told reporters that he posted the message because he hopes terrorism will be eliminated and he believes Israel has the right to protect its own citizens from terrorist attacks. He did not mince his words while addressing the situation, and these actions by India and Japan are a clear message to Joe Biden that, he may be shying away from taking a stand for friends, but New Delhi and Tokyo will not remain bystanders just because Joe Biden has decided not to speak up bluntly.

On the other hand, the White House also issued a readout of Biden’s phone call with Netanyahu. The readout states, “He (Biden) shared his conviction that Jerusalem, a city of such importance to people of faith from around the world, must be a place of peace.”

Biden is deliberately internationalising the Jerusalem unrest because he understands how it forces the Arab States to speak up against Israel. Ultimately, the White House wants to strike at the heart of Abraham Accords. Joe Biden is not concerned about the escalations as long as he can score his own brownie points.

Read more: By emboldening Palestine to attack Israel, Biden has stuck a dagger right in the heart of Abraham Accords facilitated by Trump

Hamas has fired in over 2000 rockets and counting, targeting Israeli cities and civilians residing in them. In response, Israel has struck Hamas and other terror groups in Palestine. Meanwhile, Western liberal propagandists have started blaming Israel for the latest spate of violence, even though the Jewish nation is only protecting itself.

In today’s #UNSC meeting on events in East #Jerusalem & elsewhere, I mentioned:

However, India showed signs of support for its key ally in the Middle East during Wednesday’s UN Security Council meeting. India’s Permanent Representative/ Ambassador to the United Nations TS Tirumurti tweeted about India’s position during the closely watched meeting.

Tirumurti disclosed that he condemned “all acts of violence, especially rocket attacks from Gaza.” He also mourned the tragic demise of an Indian national in Israel, as a consequence of Hamas rocket attacks against the Jewish nation. Tirumurti also appealed for “immediate de-escalation”, apart from advising the relevant sides to refrain from “changing status-quo.”

Read more: By emboldening Palestine to attack Israel, Biden has stuck a dagger right in the heart of Abraham Accords facilitated by Trump

India’s stance is consistent with its diplomatic strategy of fostering peace and de-escalation. Nonetheless, India’s response to the recent Israel-Palestine skirmishes is noteworthy. India has overcome its fear of calling a spade a spade. Although Tirumurti stated that India condemns all acts of aggression, he explicitly stated in both tweets that New Delhi condemns rocket fire from Gaza.

India’s comments at the UN Security Council must be viewed as a show of support for Israel. India is in favour of dialogue, but it also recognises that Hamas is the true aggressor. Similar voices are coming from Japanese lawmakers and as things look, India and Japan show unequivocal support for Israel, in a clear message to Biden.