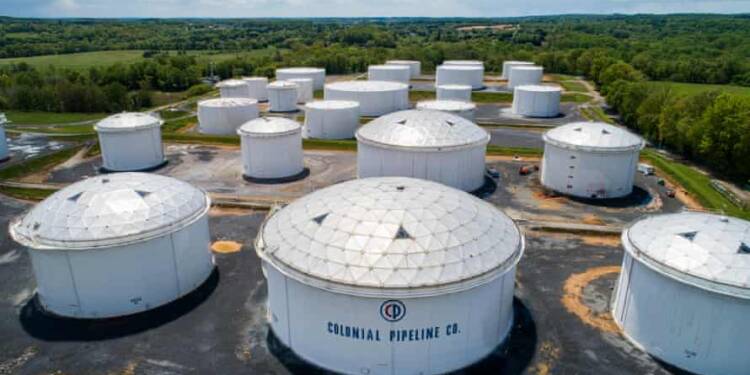 The USA has been hit with one problem or another in these pandemic ridden times, and like every other time, Joe Biden has followed the time-tested method of ignoring the problems and leaving it to his loyal mainstream media to bury the story under the carpet. However, there are some things which are not adding up and which lead to some questions which, in turn, lead to the speculation about these unprecedented gas shortages in America possibly being an inside job so that certain objectives could be fulfilled which could otherwise take a really long time.

As the price of a gallon approaches what it was more than six years ago, gas stations along the Southeast coast are being slammed by panic buying and long queues. According to the Automobile Association of America, the closure of the country’s largest oil pipeline due to a debilitating cyberattack suspected to be organised by a Russian-based criminal group brought Tuesday’s national average gas price to $2.985 per gallon. That’s a fraction of a penny less than the $2.99 and higher average rates seen last November. The 5,500-mile Colonial Pipeline, which transports more than 100 million gallons of fuel a day from Texas to New Jersey, was shut down for five days straight.

Gas prices are up, and renewed travel this summer looks likely to keep them relatively high. Long gas lines across the East Coast, due to a ransomware attack on a major U.S. pipeline, caused a degree of panic at the pump this week. While some have claimed that the attack was from Russian hackers, Joe Biden has not used his platform to give voice to these claims, and the fact that he is looking forward to a meeting with Russian President Vladimir Putin this June, the possibility of these claims being true are very minute.

Colonial Pipeline has brought its entire system back online, and Biden said he expects to see improvement this weekend “and into early next week.” “Don’t panic, No. 1,” he urged Thursday. “I know seeing : lines at the pumps or gas stations with no gas can be extremely stressful, but this is a temporary situation.”

The FBI confirmed that DarkSide, a ransomware group, was behind the attack. The company resumed the pipeline’s operations on Wednesday. Colonial reportedly paid $5 million in ransom to hackers using cryptocurrency. “We do not believe the Russian government was involved in this attack, but we do have strong reason to believe that the criminals who did the attack are living in Russia,” President Joe Biden said on Thursday.

All these developments coupled with the fact that the Biden administration is trying to find ways to fasten the process of people moving on electric vehicles and to further his green push, lead to a hypothesis that they may all be related developments. It may be the case that by looking the other way with these developments making it hard for people to function, the President and his high offices may be trying to bring changes into the behavioural patterns of the people to catalyse their green push. While this is just one of the many claims, the chronology of things happening give much credence to these claims.

Had it not been for Trump’s efforts, Israel would have been surrounded by blood-thirsty nations from all sides