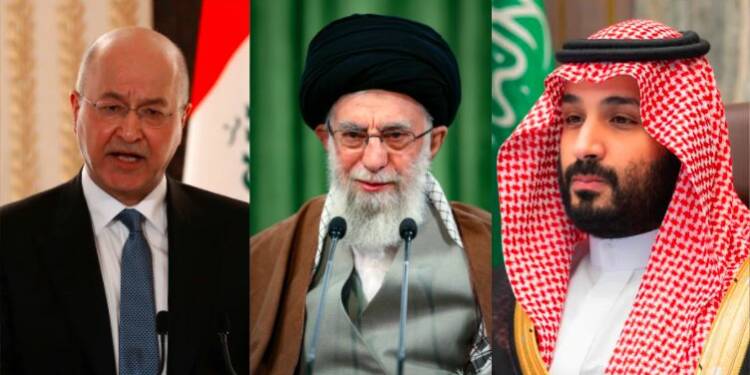 Somethings are common knowledge in the realm of International Relations, and one of the most common ones of these is, any small country should try to stay vigilant from becoming a barter in the dealings of two larger powers, however, Iraq seems to have become leverage for Iran in its ongoing talks with Saudi Arabia. On Sunday, Iraqi MP Hassan Salem called on Baghdad’s government to sever relations with the Gulf states that have signed normalization agreements with Israel, namely the United Arab Emirates (UAE) and Bahrain. He also included Saudi Arabia, which is believed to have unofficial links to the Jewish state.

Iraq has long been under the shadows of Iran and because of which it had very low diplomatic mobility, however, recently Iraq started building its relationship with Saudi Arabia as well as other Gulf countries. Iraqi Prime Minister Mustafa al-Kadhimi travelled to Saudi Arabia and the United Arab Emirates in March and April in search of financial assistance. Where he received a pledge to spend $3 billion from each country.

Both capitals have stated that at least a portion of their investments would be directed toward renewable energy. However, Iran sees it as an attempt on part of Iraq to get away from the Iranian sphere. And now by using its influence in the political echelons of Iraq, Tehran is trying to force it to undo all the goodwill and positive relations that it has succeeded in building with Saudi Arabia and UAE among other gulf countries. The result may be favourable for Iran and may help out as very resourceful leverage, but in the long term, Iraq will become a real casualty.

The two Arab powers Saudi Arabia and UAE are funnelling billions of dollars in investments in Iraq. This is a way to consolidate power and influence in the country. Till now, Iraq has been monkey balancing among three powers- the United States of America, Iran and the Arabs. Yet, back-to-back investments of the two Arab nations are ensuring that it does not need to do monkey balancing any longer.

Read more: Iraq will be Iran’s first target after US-Iran nuclear deal but Saudi and UAE have begun strengthening their Arab ally

The UAE too announced a $3 billion investment in Iraq to bolster economic and investment relations between the two nations. The UAE and Iraq also issued a joint statement after the Iraqi Prime Minister visited the UAE.

However, now the Iranian regime is using its influence to make it awkward for Iraq to continue with the diversification of its geopolitical relations. Iran is using Iraq to gain leverage over Saudi Arabia in the ongoing talks and Iraq will be the ultimate casualty. The country will continue to be in a state of socio-economic disaster and any hopes of getting out of it will be squashed in the face of becoming a barter in the hands of Iran.