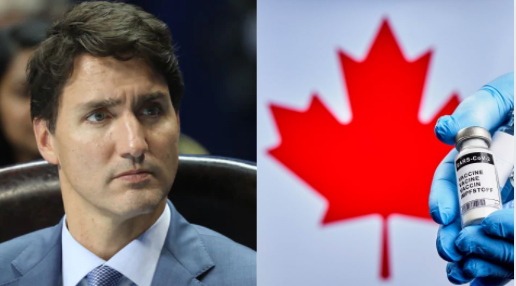 Canadian Prime Minister Justin Trudeau is pushing his country towards a severe disaster and throwing himself into big trouble. His diplomatic failures have mounted vaccine shortages in Canada and now Canadians may have to receive mixed vaccine doses. And no one can confirm with reasonable certainty as to how effective or harmful it will be.

In fact, there are a number of Canadians who received the first dose of the AstraZeneca COVID-19 vaccine, which has delivered effectively in the United Kingdom. But the problem with Canada is the horrible mismanagement of the vaccine doses that it received. The consequence- hundreds of thousands of Canadians left waiting for a second jab of the COVID-19 vaccine. This really opens up a possibility for a class-action lawsuit against Trudeau for gross negligence in the Canadian vaccine rollout programme.

To start with, Trudeau’s vaccine diplomacy was way off the mark. When he should have really been negotiating the import of vaccines from India- the vaccine powerhouse of the world, the Canadian Prime Minister was busy with propaganda activities over the farm protests in India.

It was only when Trudeau faced too much pressure within Canada that he finally decided to reach out to India for more vaccines. But he was a bit too late. Since April, India has been facing a major spike in COVID-19 cases, and therefore, vaccine shipments from India to Canada got indefinitely delayed.

New Delhi had to prioritise its domestic vaccination programme and therefore, Canada realised how Trudeau’s lethargic diplomacy had put the entire nation at peril.

Make no mistake, Canada had placed a huge order for vaccine doses. It ordered more vaccines than its entire population. But supplies have been delayed and the vaccination programme itself has been riddled with mismanagement. So, the nation is unlikely to achieve its target of vaccinating its entire population by the end of September.

Initially, Trudeau decided to rely upon European vaccine suppliers. However, second jabs of the vaccine doses were not being systematically reserved for those getting vaccinated. Canada was not positioned to ensure two authorized jabs and things got worse when European factories themselves started struggling with supplies.

Now, Canada is eyeing Pfizer and Moderna vaccines from the United States of America. But what about those who received, say the AstraZeneca jabs as the first dose? Now, here Canada might have to mix up vaccines.

Unlike Canada, India has managed to administer the second dose within the time limits for the two different vaccines being used in the country.

On the other hand, some Canadians are being made to wait for as many as four months before the second dose. So, the first dose effectively becomes useless. Worse still, the Trudeau government is looking to mix COVID-19 doses even though there is no proper study that guarantees that mixing up two different vaccines can ensure immunization. Then, there is also a risk of side effects if vaccine doses are mixed up recklessly.

What the Trudeau government is trying to do is scientifically imprudent. Every vaccine has its own method and scientific formula. You cannot mix up two different formulations callously and expect that things would work out.

Pfizer and Moderna, for example, use m-RNA technology for manufacturing COVID-19 vaccines. On the other hand, AstraZeneca vaccines are considered viral vector-based vaccines. So, can you just mix up the two and expect desired results?

Trudeau is literally pushing Canada towards a potential public health crisis of a new kind. This could put him in big trouble with a class-action lawsuit by those who are being set up for mixed vaccine jabs.