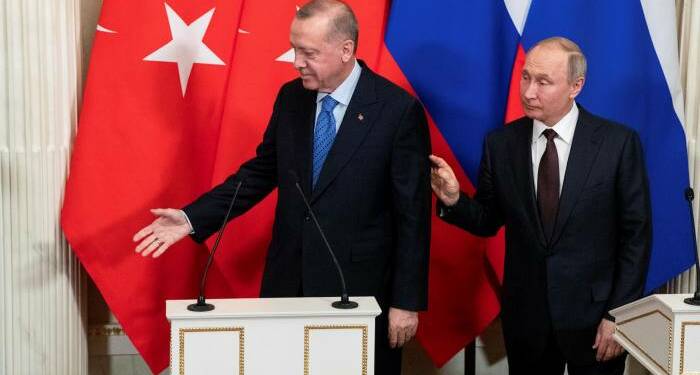 There are few leaders in this world who tend to keep punching above their weight and even after humiliation, do not get the drift of things. Turkey’s President Recep Tayyip Erdogan is one of those anomalies. Even after failing miserably in his design to destabilize the region and coming out as the neo-Ottoman caliph, he still seems to be going about trying to pursue that failed venture.

According to a report by memri.org, post the ceasefire between Israel and Hamas, Turkish president Recep Tayyip Erdogan proposed to create a joint peacekeeping force with Russia. While it may sound as a responsible statement to a layman, it was an obvious attempt by Erdogan to use Moscow for gaining influence in the Palestinian cause and shifting the balance from the Arab world. While the aim was to create a joint peacekeeping force to save the Palestinians, Turkey got roasted by Russia brutally.

Erdogan was effectively dangling the prize of greater Russian dominance in the region, thus displacing the US as the key peacemaker, in front of Putin. The proposal did not entice Putin, and as press speculations suggested that Erdogan was attempting to bind Russia to a task that would strengthen Erdogan’s position, Putin totally called out his spade.

Since the forces are too divided among themselves, Stanislav Tarasov, the editor of Regnum’s Eastern version, dismissed the concept of a great power concert to impose peace. Furthermore, past experience with similar clashes tells us that the situation is likely to calm down and that world peace is not in jeopardy just yet.

He further added that Turkey was the last country qualified to serve as a mediator. According to Cumhuriyet media, Ankara has lost the opportunity to serve as a mediator to the conflict because, firstly, ‘it collaborates with certain jihadist groups due to the country’s intervention in the civil wars in Syria and Libya’. Secondly, ‘Turkey’s attempts to resume dialogue with Israel, Egypt and Saudi Arabia made in order to avoid isolation in the region and in the Eastern Mediterranean were revealed.”

Thus, the Turkish President has a narrow space for any manoeuvres due to the fact that his statements condemning Israel are not calculated to achieve any political results.

Political scientist, Yevgeny Satanovsky, mocked the Turkish leader saying that he has confused his conflated ego for Suleiman the Magnificent or Mehmed the Conqueror. These words are important when it comes to understanding how desperate Erdogan is to become the new hero of Turkey’s rise as the centre of the Islamic world.

Read More: Turkey has moved to Russia’s side. Israel, Japan and India have expressed similar feelings too – Biden is losing Cold War 2.0

During the fighting between Israel and Hamas, Russia played a cautious role, satiating itself with the usual platitudes about the need to de-escalate conflict and prevent civilian casualties. Erdogan’s attempt to entice Putin to play a more active role came when he invited Russia to join a peacekeeping force in the conflict zone. However, only to show its position in the geopolitical power hierarchy and also get roasted by Russia brutally.