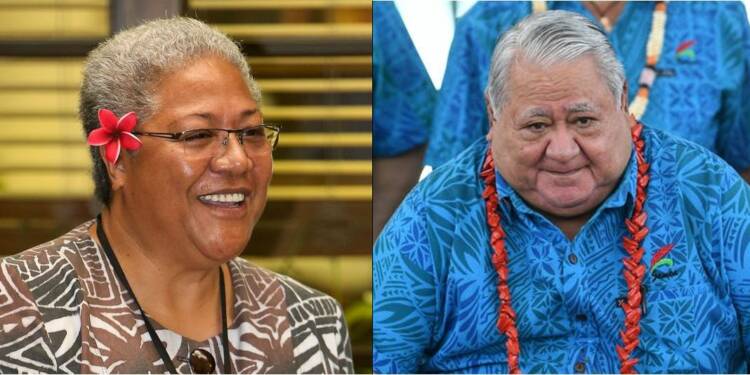 The political crisis in Samoa deepened on Monday when the leader of the opposition party held a ceremony outside the locked parliament to form a government after the incumbent prime minister refused to relinquish power.

Since an April election gave the FAST opposition party a one-seat parliamentary majority, a series of twists and turns have resulted in a power struggle between the courts and the head of state in the Pacific country, which has been a long-time supporter of China.

“Democracy is inseparable from human rights which are inalienable by our laws as well as by international covenants that we have sworn to uphold,” FAST deputy leader Laaulialemalietoa Polataivao Schmidt said on Facebook on Monday. “Democracy must prevail, always.”

Only the head of state, Tuilaepa told reporters in the capital Apia on Monday, could convene parliament in the 200,000-strong country. “We remain in this role and operate business as usual,” he said.

During Tuilaepa’s more than two decades as Prime Minister, Samoa was a loyal ally of China. Fiame is expected to reframe Samoa’s ties with China after telling Reuters last week that a $100 million Beijing-backed port construction project will be shelved, calling the project excessive for a small country already heavily indebted to China. Fiame, a former deputy prime minister who split with the government last year after opposing changes to Samoa’s constitution and judicial system, said she wanted to retain good relations with both Beijing and Washington.

On Monday, Prime Minister Jacinda Ardern of New Zealand said that the election results should be respected. “All we are doing here is calling for the outcome and the wishes of the people of Samoa to be upheld and that’s obviously the work the judiciary is doing right now,” Ardern said.

The proposed wharf in Vaiusu Bay has been a contentious problem in Samoa, and it played a role in the April elections, in which long-serving chief Tuilaepa Sailele Malielegaoi lost his parliamentary majority. As the US and its allies react to China’s rising presence in the region, the project has also threatened to spark a Pacific waterfront competition. China has been chastised by the United States and other Western countries for extending loans to developing countries for infrastructure projects that could leave them with unsustainable debt. China has reacted angrily to the criticism. China is Samoa’s single largest creditor, accounting for about 40% of the country’s external debt, or $160 million. Samoa has a population of 200,000 people.