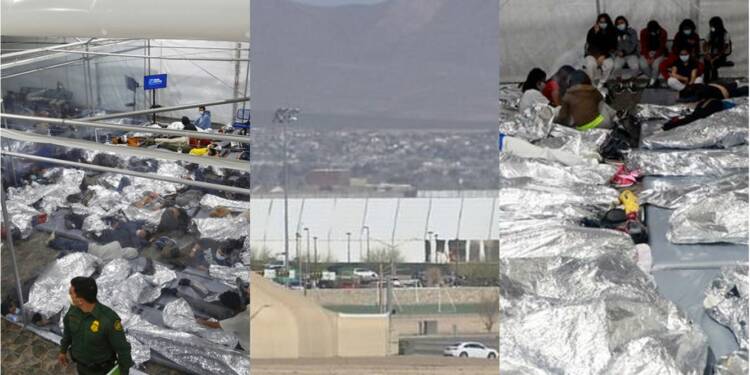 According to interviews, photographs, records, and recordings collected by Reason, more than 4,500 immigrant children and teens are being kept in a vast shelter on a military base in Texas without access to basic necessities including underwear. Hundreds of senior federal employees from a variety of agencies have been assigned to the facility, where they will be paid well to perform activities for which they have no experience or guidance.

“If you took a poll, probably about 98 per cent of the federal workers here would say it’s appalling,” a federal employee detailed to the facility told Reason. “Everybody tries in their own way to quietly disobey and get things done, but it can be difficult.”

The shelter, which is mostly used by adolescent boys, is located at Fort Bliss, an Army base near El Paso where the harsh desert environment is used to simulate conditions in Afghanistan and Iraq. The Fort Bliss shelter is growing in size as other shelters close. These shelters are, in principle, a stopover for children waiting to be reunited with families or other relations in the United States. In reality, staffing concerns and other issues have stranded many children for up to a month or longer.

The Associated Press first revealed earlier this month that the Biden administration is keeping “tens of thousands of asylum-seeking children in an opaque network of some 200 facilities” after pulling them out of Customs and Border Protection detention centres. Even though Health and Human Services Secretary Xavier Becerra stated on Monday that the Fort Bliss facility was not suitable for “tender age” children, thousands of teenagers remain housed there.

The shelter is run by a mixture of contractors and federal workers assigned to the Department of Health and Human Services (HHS), many of whom volunteered to support stranded immigrant children. According to a regular update obtained by Reason on May 22, some 750 federal workers work there. According to a federal employee, the majority of them are simply “babysitters and clerks.” The shelter housed 4,632 minors as of May 22, including 3,873 boys and 759 girls.

Reason obtained recordings that show the federal government’s stress as a result of the flood of unaccompanied minors. They also show that the shelter’s leaders are well aware that they are struggling to provide basic necessities to the children under their care, such as medical care and physical protection.

On the condition of anonymity, federal workers assigned to the Fort Bliss shelter told Reason that they work 12-hour shifts six days a week. Basic types and supplies, such as lice kits, are in short supply, which is causing irritation.

The trainer admits a series of shortcomings in a recording of a recent training session for federal employees led by a staffer from Chenega, an Alaska Native-owned company that is supplying workers for the shelter.

“I’m not going to lie, we’ve got people dropping like flies because it’s just not something that they’re used to,” the trainer says in the recording, which Reason is not releasing to protect the source’s identity. “This facility is growing so fast, and we are getting kids on a daily basis. We don’t have enough staff to maintain.”

The trainer also mentions the unsanitary conditions inside the tents, which can hold up to 1,000 people in stacked bunk-style cots. “I’ve been into one dorm, one time, and I was like, yeah, I’m not going back there,” the trainer says. “They’re filthy. They’re dirty. There’s food on the floor. There’s wet spots all over the place. The beds are dirty. I don’t know what’s going on or who’s responsible for ensuring that the dorms need to be clean, but we all need to be responsible for telling the minors to clean up after themselves.”

According to the trainer, there has been improper interaction between minors and employees, as well as between minors. “We have already caught staff with minors inappropriately,” the trainer says. “Is that OK with you guys? I hope not. We have also caught minors with minors, which is, you know—we’ve got teenagers in this shelter. What’s happening with teenagers? Hormones, raging out of control. It’s important that we maintain safety and vigilance. Be vigilant. Stop what is happening. If you don’t watch these kids, and you’re not the one who is going to step in, who’s going to? Be that person to stand up for the minors because that’s what we’re here for.”

Children are also being ignored when they request medical care. “Some of the incidents and complaints we’re getting also is that we’ve got minors who are requesting medical due to not feeling well, and staff members are telling them there’s nothing wrong with you, go back to your bed,” the trainer says. “These are legitimate complaints and it is my duty to let you know what is going on, because if you know who these people are, you need to report them.”

Unsanitary conditions have also been documented at the Fort Bliss shelter, according to youth advocates. The tents “smelled like a high school locker room,” according to Leecia Welch, senior director of the National Center for Youth Law’s legal advocacy and child protection practice, who visited them recently for The New York Times and reported that the children were not providing clean clothing.

In its southern frontier with Mexico, the Biden administration’s virtue signalling and woke policies have adopted the Leftist-Communist dictum know no boundaries. This irrational approach has made life extremely difficult for residents of border-states in the United States, as well as those who are flooding the border.

No adequate facilities, no security, and no proper care, why so? Because the policies when made weren’t really given much thought, they were passed without adequate deliberation, their sole agenda was to please the left-leaning section of the democrats, Biden failed to even achieve that but, in the process, he made the lives of thousands of children insufferable.