A mysterious, unclaimed airbase right off the coast of Yemen is the missing link to UAE’s global power projection 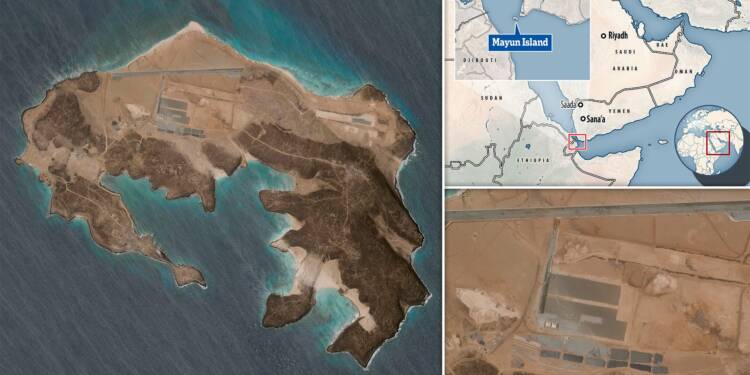 A mysterious airbase has been constructed on a volcanic island off the coast of Yemen, giving whoever controls it the ability to project power in one of the world’s most important maritime checkpoints for both energy and commercial cargo.

Although no nation claims the Mayun Island airbase in the Bab el-Mandeb Strait, shipping traffic linked to a previous attempt to construct a large runway across the 5.6km (3.5 miles)-long island traces back to the United Arab Emirates.

Despite the UAE’s announcement in 2019 that it was withdrawing its forces from a Saudi-led military operation fighting Yemen’s Houthi rebels, military officials in Yemen’s internationally recognised government have said the Emiratis are behind this new initiative as well, according to the Associated Press.

According to military officials, the UAE’s recent tensions with Yemen’s president, Abed Rabbo Mansour Hadi, stemmed in part from an Emirati demand that his government signed a 20-year lease agreement for Mayun. Officials from the Emirati government have denied any dispute.

“This does seem to be a longer-term strategic aim to establish a relatively permanent presence,” Jeremy Binnie, the Mideast editor at the open-source intelligence company Janes who has followed construction on Mayun for years, told the Associated Press. It is “possibly not just about the Yemen war and you’ve got to see the shipping situation as fairly key there.”

Mayun Island’s runway allows whoever controls it to quickly launch airstrikes into Yemen’s mainland, which has been ravaged by years of civil war. It also serves as a staging area for operations in the Red Sea, Gulf of Aden, and East Africa.

On April 11, satellite images from Planet Labs Inc showed heavy construction vehicles on the island constructing a 1.85km (6,070-foot) runway. The work appeared to be finished by the 18th of May, with three hangars built on the tarmac just south of the runway. An earlier attempt, which started towards the end of 2016 and was later abandoned, saw workers try to construct an even larger runway over 3km (9,800ft) long, which would allow for the heaviest bombers.

After retaking the island from Iranian-backed Houthi rebels in 2015, Emirati and allied forces launched a failed construction project. Satellite images from late 2016 revealed that construction was underway. Engineers were unable to dig through a portion of the volcanic island’s craggy features to add the site of the island’s old runway, so construction was halted in 2017.

Satellite photos show that construction on the new runway site resumed in earnest about February 22, several weeks after US President Joe Biden declared that the US would no longer support the Saudi-led offensive against the Houthis. The UAE’s apparent decision to restart construction of the airbase comes after the UAE demolished parts of a military base it used as a staging ground for its Yemen campaign in Eritrea.

Mayun, also known as Perim Island, is located 3.5 kilometres (two miles) off Yemen’s southwestern coast. For hundreds of years, world powers have recognised the island’s strategic position, especially since the opening of the Suez Canal, which connects the Mediterranean and Red Seas. Britain retained control of the island until 1967 when it left Yemen. According to a 1981 CIA report, the Soviet Union, which was allied with South Yemen’s Marxist regime, upgraded Mayun’s naval facilities but only used them “infrequently.”

However, US troops used to operate out of Yemen’s al-Anad Air Base, where they operated a drone strike campaign against al-Qaida in the Arabian Peninsula before the Houthi advance forced them to withdraw in 2015. In 2016, the Defense Department admitted that American troops on the ground backed the Saudi-led coalition around Mukalla. The country has also been attacked by special forces raids and drones.

Now with the construction of the Airbase completed, the UAE, which has been a staunch supporter of the Yemeni government and supports Saudi in the Yemen war can easily project its power with the use of the airbase. With the political dynamics once again on the change in the region with the Biden administration pushing for the nuclear deal with Iran, the UAE can easily keep Iran’s rise in check and tussle for power with Saudi Arabia as well as at the same time signalling its rise as a power to be reckoned with in the middle east.