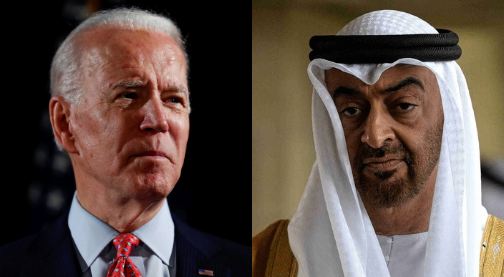 Joe Biden’s Middle East policy has spelled quite a disaster for Washington’s frontline allies in the region- Israel, the UAE and Saudi Arabia. The Arabs and Israel started sharing bonhomie by signing peace agreements dubbed “Abraham Accords”, with unconcealed blessing from the Trump administration. However, the Biden administration is becoming very difficult to handle for Israel as well as Arabs. In this context, the UAE is now looking to outsmart the Biden administration with a fresh plan.

Washington’s Middle East allies are getting some disturbing signals. The sitting US President is side-lining Saudi Crown Prince Mohammed Bin Salman and insulting Israel’s Prime Minister Benjamin Netanyahu. The UAE itself is taking some of the beating as the Biden administration has moved to re-impose tariffs on Emirati aluminium, apart from suspending the sale of F-35 fighter aircrafts to the Arab nation. And quite disgustingly, Biden is doing all this just to derail the Abraham Accords.

Yet, the UAE seems to have shifted to a new plan for tackling the vindictive and egregious man presently helming affairs at the Oval Office. The UAE has made a key cabinet reshuffle. It has removed Anwar Gargash, who has served as the country’s Minister of State for Foreign Affairs since 2008. Without being demoted, Gargash will now serve as an advisor at the UAE Presidential Office.

Why has this cabinet reshuffle been made, after all? Initial reports say that it was linked to internal dynamics within the UAE. Gargash has been the face of Emirati foreign policy for quite some time now and Abu Dhabi’s Crown Prince Mohammed bin Zayed (MBZ) does repose faith in him. But there has been a tendency to centralise power within the UAE.

Dr. Andreas Krieg, an Assistant Professor at King’s College London explains, “Gargash is someone who is not in the inner circle despite the fact that MBZ trusts him. What we’ve seen over the last couple of months, and especially since Biden got elected, is more centralisation of power in Abu Dhabi within the hands of a tribal network within the [Al Nahyan] family.”

But why is the centralisation happening and how is it linked to Biden? This is again related to Abraham Accords. Gargash, who overlooked the Emirati foreign policy, played an indispensable role in bringing the UAE and Israel closer to normalising their diplomatic relations. The UAE eventually became the first Arab nation to sign an Abraham Accord with Israel last year.

Now, the UAE has to recalibrate its foreign policy and reset ties with the United States of America. This is why Gargash has been replaced, and he has not been punished or demoted.

The replacement might seem defeatist to some and it might even seem as if the UAE has succumbed to all the pressure being exerted by the Biden administration. But it isn’t as if the UAE is going to change its foreign policy altogether.

Make no mistake, MBZ has no plans to turn anti-Israel all of a sudden. By replacing his pro-Israel Foreign Minister, the UAE President is only trying to read Biden’s mind, because at the end of the day there is a lot of uncertainty. Biden keeps saying that he supports Abraham Accords, but he is also trying to punish those who have executed these peace agreements. So, the UAE simply wants to test his true intentions.

As for Israel, the UAE is only warming up to the Jewish nation. On Sunday, the UAE’s first ever Ambassador to Israel, Mohammed Mahmoud Al-Khaja, was sworn in. This has set the tone for celebratory preparations in both Israel and the UAE. On Monday, an Emirati technical delegation arrived in Tel Aviv despite COVID-19 measures to prepare or the Emirati embassy opening in the Israeli city.

Therefore, the UAE continues to share a sense of jubilation in its ties with Israel. Biden may think that he has found some success in derailing the spirit of Abraham Accords, but the UAE is playing its plan B quietly.