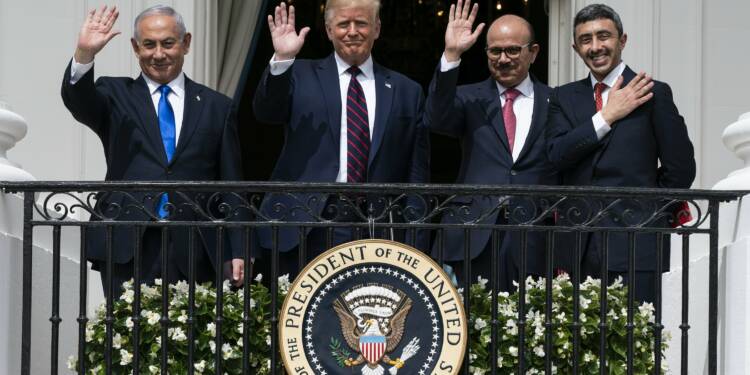 Do you know what made the former US President Donald Trump special? He was probably the first US President to get the Middle East policy right. He ensured peace by bringing two key American allies- Israel and Saudi Arabia together and making both the Arabs and the Jews happy. But Joe Biden, the 46th US President, who loves claiming the high moral ground is ruining all the progress that Trump had made.

Merely a day into office, Biden has found a way to make both US allies unhappy, and this can seriously jeopardise the newfound balance and peace in the Middle East. Israel’s Prime Minister Benjamin Netanyahu, as well as Saudi Crown Prince Mohammed bin Salman, are miffed with the new US President and it seems that the White House could lose both the allies together.

See how Israel and the US are falling apart under the Biden administration, even though Trump had elevated US-Israel ties to a new high.

Israel’s PM remains grateful towards Trump because Democrat leaders like former US Secretary of State John Kerry had earlier declared that there would be “no separate peace between Israel and the Arab world” without resolving the Palestine conflict.

But guess what, Trump brokered peace deals dubbed Abraham Accords between Israel and Arab nations like the UAE, Bahrain, Sudan and Morocco, and that too by sidelining the Palestinian cause. And then, Israel was always happy about Trump withdrawing from the Iran Nuclear deal, apart from imposing tough sanctions on the Shi’ite nation that actually wants to wipe out Israel.

An online outrage followed the title change of the official Twitter handle, and it reverted to ‘US ambassador to Israel’ soon. But the signal from the Biden administration was clear- the new administration doesn’t consider any parts of the West Bank and Gaza as Israeli territory, and it wants to revive the Palestine issue.

Israel is making its unhappiness with the new US administration known. An Israeli news broadcaster, Channel 12 news quoted “a very senior Israeli official” in the Netanyahu government as saying, “If Biden adopts Obama’s plan, we will have nothing to talk about with him.” The official was making a reference to the Joint Comprehensive Plan of Action, which was signed by Obama in 2015 and later scrapped by Trump.

Moreover, Israel’s Institute for National Security Studies (INSS) also published a comprehensive study, which disclosed that around half of Israeli citizens do not have faith in Biden when it comes to mediating peace between the Jewish nation and Palestinians.

At the same time, Saudis are also concerned about Biden’s desire to re-enter the 2015 Joint Comprehensive Plan of Action (JCPOA). Saudi Arabia and its Gulf allies like the United Arab Emirates are deeply concerned about Iranian ballistic missiles and Tehran’s vast network of regional proxies and militias spread all across the conflict-prone region.

Riyadh fears that if Biden starts negotiating with Iran and alleviating Trump’s ‘maximum pressure policy’ against the Shi’ite nation, then Tehran might get more emboldened and belligerent.

What makes the Arabs even angrier is that the Biden administration has vowed to review the F-35s deal between the US and the UAE. Now, the American fifth-generation fighter aircraft are integral to Abu Dhabi’s plans for countering an aggressive Iran and even Israel had acquiesced, but Biden is looking to play spoilsport here.

So, both Israel and Arabs find how the Biden administration has started emboldening their common enemy- Iran. As such, both Saudi and Jewish lobbies want to check Biden’s apparent rapprochement with Tehran. And therefore, Israel and Saudi Arabia are getting even closer. Biden, however, seems to be losing two key American allies rather dramatically and reversing Trump’s impressive diplomatic gains over the past four years.