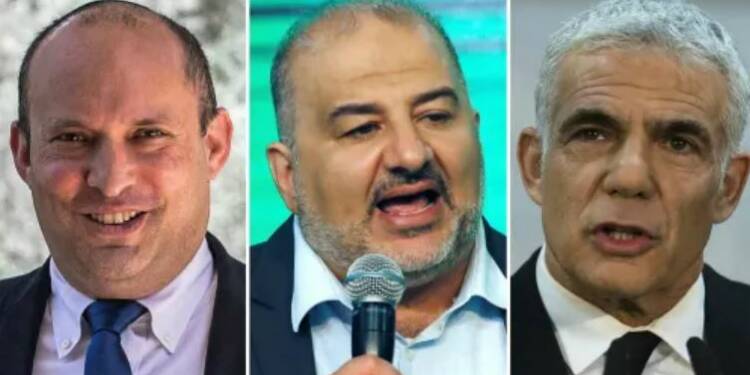 To depose Prime Minister Benjamin Netanyahu, almost every political force of Israel has joined hands in an unholy, fragile, weak and largely directionless coalition. The purported ‘Change Government’ which is soon to take charge under the leadership of right-wing millionaire Naftali Bennett for the first two years has parties from the far-right and the far-left. It has parties belonging to the centre too. What’s worse – the coalition also has Palestinians who will now be a part of the Israeli government. This is a disaster, which Israel has not faced since the 1950s.

The hatred for Benjamin Netanyahu has brought power greedy parties and Palestinian agenda peddlers together. Meanwhile, it is the people of Israel – more specifically the Jews who will suffer the most for whatever time the ‘Change Government’ rules over the country. Islamist Ra’am chief Mansour Abbas on Wednesday became the first Arab Israeli party leader in half a century to sign a deal to sit in a coalition government in Israel. The reason for everyone joining hands against Netanyahu is due to the simple fact that they are so afraid of him.

His party – openly and unabashedly dedicated only for Arabs in Israel, will now be a part of Israel’s government. The reality is that all political forces have come together owing to their fear of Netanyahu. He is the tallest leader of Israel, having a perfect grip on Israeli nationalism. Netanyahu is a brilliant diplomatic communicator – strengthening Israel’s ties across the world and standing up to Joe Biden. He is an impeccable leader who has taken Israel to great heights, and who has a very personal relationship with the IDF and all other security agencies.

Most recently, how Netanyahu defended Israel and gave a jaw-breaking response to Hamas during the 11-day war is well documented. He even forced Joe Biden to rectify his rather pathetic Middle East policy, after which the United States was seen standing firmly with Tel Aviv. As such, it became unviable for the opposition parties of Israel to opt for a fifth round of elections – since a gigantic Netanyahu victory would have been imminent this fall.

The Arab parties have struck a juicy deal for themselves. While the Islamist Ra’am party ensures that Israel does not go hard on Palestinian activists, it has also secured massive economic packages for the 21 per cent Arab population within Israel. However, most of the benefits, as per Abbas’ own admission will be going to the Negev region in southern Israel. Ra’am’s base is among the traditional Bedouin communities in the Negev desert.

Ra’am said that the so-called change bloc agreed to over NIS 53 billion ($16.3 billion) in budgets and government development plans for Arab society. According to a statement by the Islamist party, Bennett and Lapid pledged NIS 30 billion over five years in unspecified economic development funds, as well as another NIS 2.5 million ($770,000) to fight violence and organised crime in Arab society. According to the Times of Israel, another NIS 20 million ($6 million) will be invested over the next 10 years to fix crumbling infrastructure in Arab cities and towns.

The coming together of the rainbow coalition, with the support of an Arab Islamist party that identifies more with Palestine than it does with Israel is going to be a disaster for the people of Israel – at least domestically. Arabs will be emboldened and will treat Israeli Jews with bravado. Since the government would be fragile, Naftali Bennett despite being a right-winger, would not be able to do much. Then, if the government survives two years, a left-leaning Prime Minister in the form of Yair Atid would come in. And then, what will become of Israel is beyond any imagination.

Meanwhile, Benjamin Netanyahu – the most feared politician in Israel and beyond, is going out in style. Iran’s largest naval warship caught a massive fire on Wednesday and drowned in the Strait of Hormuz. Hours later, a massive blaze struck one of Iran’s largest oil refineries in Tehran – covering the capital city with plumes of black smoke. In Golan Heights, meanwhile, Israel on Tuesday destroyed a Syrian regime observation post.

But Israel’s fortunes can be saved. The rainbow coalition government will fall under its own weight, and if not, it would require some pushes to collapse.