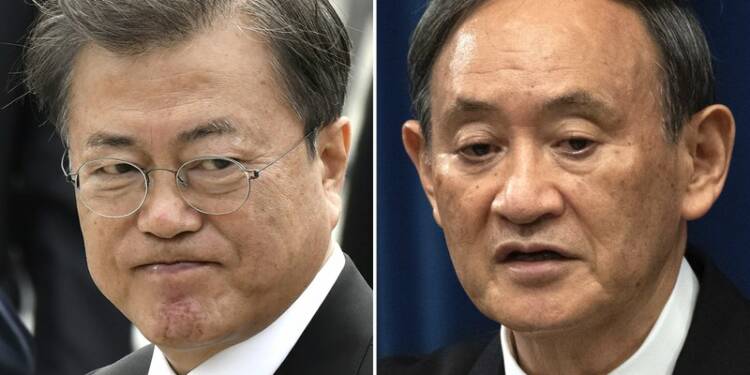 Moon Jae-in is making one political blunder after another, and due to the mountain of bad decisions and the public opinion already vehemently against him, the odds of him winning the next elections are very slim. However, with the situation in East Asia tensing up and Japan taking a leading role to counter the actions of the Chinese Communist Party, Moon is trying to rebuild relations with Japan. While it is a good decision and it will be helpful for the democracies in East Asia in the larger scheme of things, he will not be able to reap the political benefits of the same.

As South Korea prepares to meet with Japan and the U.S. at the upcoming Group of Seven summit, a court here on Monday dismissed a wartime compensation suit against Japanese companies in a potential step toward thawing ties with Tokyo. The administration of South Korean President Moon Jae-in so far has not put forth a solution the Japanese side finds acceptable, however, the new ruling dismissing the ordering to companies to compensate wartime labourers would likely help reach a situation of calm with Tokyo ahead of the G-7. South Korea is open to discussing reasonable solutions that are acceptable to all parties, its Foreign Ministry said shortly after Monday’s decision was announced.

However, these developments reign favourable to the possibility of discussions ahead and give way to a more comprehensive understanding between South Korea and Japan. The Japanese government has long held that the issue of wartime labour, including any individual rights to compensation, was settled as part of the 1965 agreement. But South Korea’s Supreme Court in 2018 ordered Nippon Steel to compensate former wartime labourers, arguing that the 1965 accord does not apply to illegal activities by Japanese companies under illegal Japanese rule. The Seoul Central District Court in January also ordered the Japanese government to compensate former “comfort women.”

Moon claimed at first that he had no choice but to follow the judges’ verdict on these wartime matters. However, in January, he changed his tune, telling reporters that forcibly liquidating Japanese company assets to compensate victims was “undesirable” for bilateral ties. He also voiced hope for a diplomatic settlement with Japan, partially in reaction to President Joe Biden’s drive for stronger ties between the two countries. And now the Seoul Central District Court has dismissed a lawsuit filed by 85 victims of wartime forced labour seeking compensation from 16 Japanese firms, saying accepting the case might violate a 1965 treaty under international law, giving a further boost to the trilateral relationship.

However, even if Mr Moon tries to rebuild the relationship with Japan, it is too late for his own good. Japanese officials have therefore assumed that the Moon administration is good for nothing, and they are now pinning their hopes on the election of a conservative regime next year. South Korean foreign minister Yu Myung Hwan, who is an expert on Japan-South Korea relations and had also served as Korean Ambassador to Japan, in early May said that “It is unlikely that the Korean government would change its positions and suggest mutually agreeable solutions to Japan.”

Read more: Japan has lost hope in the Moon administration and a change in govt in South Korea can only save the region

In such a situation, the fact that Moon Jae-in’s re-election is near to impossible for a conservative government in Seoul can be good news for the Japan-South Korea relationship. Given both countries are looking for ways to move businesses out of China and relocate to more secure locations, their economic and geo-strategic interests far outweigh their bilateral disputes and going ahead the work of rebuilding the relationship will be taken up by the next government. While the Moon administration is trying to do some patchwork at the 11th hour, these steps are very late and very futile.