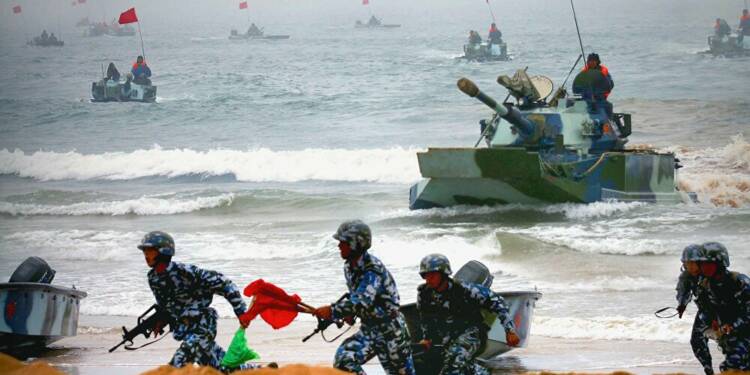 The Chinese Communist Party is not able to comprehend how to deal with an aggressive Japan. As Japan is smelling a stalled US interest in the East Asia region as well as the larger Indo-Pacific, it has taken the task of providing a leadership role with great seriousness. While Beijing was thinking things are going in its favour, Tokyo is continuously thwarting CCP’s attempts, be it in East Asia, Southeast Asia or even Oceania. Japan’s aggressive stance in the last few days and its upcoming meetings with the US and South Korea have made China delirious and it is taking some careless actions.

As Japan prepares to meet with South Korea and the US at the side-lines of the upcoming Group of Seven summit, China is undertaking provocative military activities, in an effort to intimidate the aforementioned countries before the meeting. According to the official WeChat account of the Eastern Theatre Command of the People’s Liberation Army, its 72nd Group Army carried out naval training that included transporting amphibious vehicles and conducting an assault landing in unspecified waters south of Fujian Province, which faces the self-ruled Taiwan island.

The social media post on Tuesday came after a US military transport aircraft landed in Taipei on Sunday, bringing US senators and vaccine doses for the coronavirus-hit island. According to a secondary report released on Monday by official broadcaster CCTV, the 72nd Group Army examined emergency loading, long-distance transport, and beach assault techniques in difficult water scenarios, as well as bolstering the forces’ amphibious combat support skills. According to CCTV, landing ships carried a variety of equipment in the practice, including tracked armoured vehicles, wheeled off-road assault vehicles, and trucks.

Biden has been putting the burden of his own visionless political agenda on Quad. He has brought in issues like climate, critical technologies, and Korean denuclearisation. While ideas like making Quad a vaccine powerhouse is still understandable as a means to counter China’s “vaccine diplomacy”, bringing in other issues like Korean denuclearisation, climate and critical technologies is an outright insult to the spirit and original purpose of what was intended to be an anti-China forum.

Read more: Biden turned Quad, the strongest anti-China grouping, into a useless group with no vision, India, Japan and Australia are back on track

Anyhow, the other three constituents of Quad are not letting the broad vision of countering China in the Indo-Pacific fall prey to Biden’s machinations. They continue pushing back against China’s growing hegemony even though Biden tries to go soft on Beijing and Japan is leading the charge. All these happenings, coupled with the upcoming meeting of the USA with its two long-standing East Asian allies, China has become extremely frustrated and is willing to show its seriousness by undertaking extremely provocative military exercises.

An amphibious landing is required for a force to conquer an island like Taiwan, which Beijing regards as a renegade province. Beijing has never ruled out the use of military force to bring Taiwan back together. According to Chinese media, the PLA has increased its maritime training over the years, and since September, the Eastern Theatre Command has made naval warfare a mandatory training subject.