To counter China’s BRI, G-7 nations have launched the B3W initiative and it looks exciting 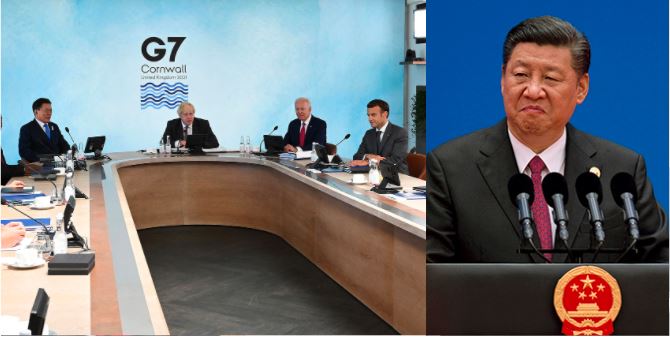 After years of ignorance from the European Union and after the early spell of playing the good boy with China by Joe Biden, the G-7 seems to have finally understood the extent of danger China’s Belt and Road Initiative (BRI). After realising that they cannot smart the project individually, all have arrived at a conclusion of joining their forces. US President Joe Biden and other G-7 leaders hope their plan, known as the Build Back Better World (B3W) initiative, will provide a transparent infrastructure partnership to help narrow the $40 trillion needed by developing nations by 2035, according to a statement by the White House.

On Saturday, a group of seven richest democracies attempted to challenge China’s expanding influence by proposing an infrastructure plan, which the US has called the B3W initiative that may counter Xi Jinping’s multibillion-dollar BRI proposal. The G-7 leaders, who were meeting in southwestern England, have been trying to come up with a clear response to Xi Jinping’s growing aggressiveness in the wake of China’s rapid economic and military rise over the last 40 years.

“This is not just about confronting or taking on China,” a senior official in Biden’s administration said, “But until now we haven’t offered a positive alternative that reflects our values, our standards and our way of doing business.” The G-7 and its allies will use the B3W initiative to mobilise private-sector capital in areas such as climate, health and health security, digital technology, and gender equity and equality, the White House added.

Leaders of some of the world's richest nations gather in picturesque Cornwall for the G7 summit, which is expected to be dominated by vaccine diplomacy, trade, climate and an initiative for rebuilding infrastructure in the developing world. More photos: https://t.co/cGGwXjqWSe pic.twitter.com/bk3pRBBC9d

Although, it was not immediately clear how exactly the plan would work or how much capital it would ultimately allocate, if we look at the policy that has influenced Joe Biden and what he is taking as a blueprint, it may follow the Trump era flagship Blue Dot Network (plan). It offered emerging countries an incentive to enact regulatory reforms that would then attract global private capital. For industry, BDN makes loan guarantees available to mitigate risk and offers a certified seal of approval backed by each host country. As it aims to increase bankable infrastructure investments in emerging countries, BDN can transform infrastructure into an investment class. So we can expect the new formulation on the same lines.

China’s Belt and Road Initiative (BRI), which was introduced by Xi Jinping in 2013, entails development and investment projects spanning Asia, Europe, and beyond. Over a hundred countries have signed agreements with China to work together on BRI projects such as railways, ports, motorways, and other infrastructure. According to a Refinitiv database, the BRI was tied to over 2,600 projects worth $3.7 trillion as of mid-last year, despite the Chinese foreign ministry stating in June that roughly 20% of projects had been severely impacted by the COVID-19 outbreak.

Another US official said that Biden made “forceful comments” to G-7 leaders about the need to make a strong statement on what rights groups say is China’s use of forced labour, but there was a “spectrum of how far different countries are willing to go” in their criticism in the final communique from the three-day summit. Later, a US source stated the G-7 had agreed on the necessity for a coordinated approach to “non-market economic practises” and human rights abuses, as well as supply-chain resilience.

Such steps to contain the Chinese Communist Party on its human rights track record and at the same time undoing the impact of BRI is the best-case scenario, that is if these countries remain committed thick and thin to the cause.