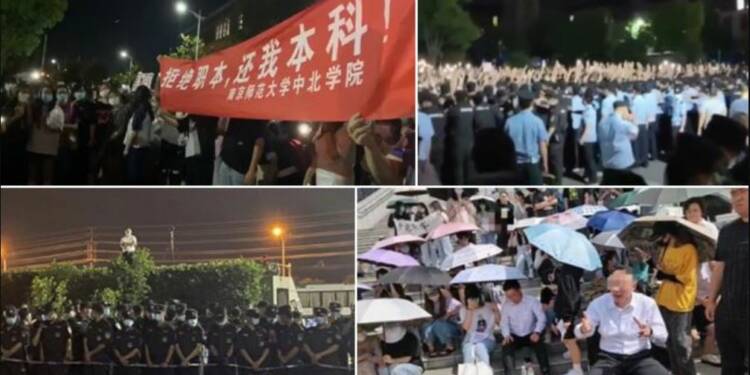 The Chinese Communist Party has been showing a facade of a brave face to the entire world and while they project themselves as strong as a boulder, in reality, they have their hands full dealing with the domestic discontent about the sheer apathy and mismanagement of the pandemic. Add to that the disregard of its citizenry and authoritarian top down dictats, the anger has been fomenting for quite some time and Xi Jinping is aware of the same.

After a violent confrontation with the police, education authorities in China’s eastern Jiangsu province have suspended a plan to merge autonomous colleges with vocational institutes. Protests like these are uncommon in China because the government strictly controls mass movements in order to maintain social stability. The Jiangsu students attending independent colleges, and their parents, see the merger as devaluing their attainment. Fearing another Tiananmen Square like episode, CCP bows down before Chinese students.

They view a bachelor’s degree from an independent college as worth more in China’s highly competitive job market than a so-called professional bachelor’s diploma from the less prestigious vocational colleges, according to CCP mouthpiece, the Global Times. However, the fact that the government was too quick to relent to the demands of the students makes it clear that CCP was fearful that this will catalyse the larger discontent among the people and may result in an unprecedented nationwide protest.

For some time, the signs of building anger and distress among the Chinese citizenry have been visible. According to this campaign which is gaining growing acceptance among Chinese students, people are becoming less and less aspirational.  As per a report by The Epoch Times, people who choose the “lying down” lifestyle say that they don’t want to become money-making machines. They want to be minimalists and do not plan on establishing a career, owning a home, and raising a family.

Read more: Chinese people have launched a ‘do nothing’ movement against the CCP and it’s crippling China

“Chongqing News Guy,” a reporter on Chinese news portal Sina, said, “Lying down is the chives’ new civil disobedience movement. It’s a silent and helpless choice.” Netizen “Aboriginal,” meanwhile, said “Lying down shows a person’s ultimate disappointment of his or her future. The persistent inequality in society drives it.” The user added, “When your monthly income is less than 1,000 yuan [about $140], how do you feel?”

On June 4, the Education Ministry announced that it would enforce the merger in 13 independent colleges, including five from Jiangsu Province. The next day, students from five independent colleges gathered on their campuses to protest. On June 6, more independent chinese college students protested on their campuses. Video showed there were physical conflicts between the police and the students at Nanjing Normal University’s Zhongbei College in Danyang. VOA Mandarin reported students there were injured.

According to a Danyang police announcement on Weibo, a Twitter-like platform, chinese students had “illegally detained the dean of the college, surnamed Chang, for more than 30 hours.” Also, students had “shouted verbal abuse and blocked law enforcement”, according to the police statement.

After all this, According to the Global Times, Jiangsu’s education administration announced the merger’s suspension on June 7 after “thousands of students lodged a petition against the idea for fear of losing their competitiveness in the job market.” All five Jiangsu institutions announced the suspension of merger plans on their official Weibo accounts early on June 8. The government apparatus and CCP realised the severity of the situation and fearing another Tiananmen Square-esque episode, it relented before the demands of these Chinese students.