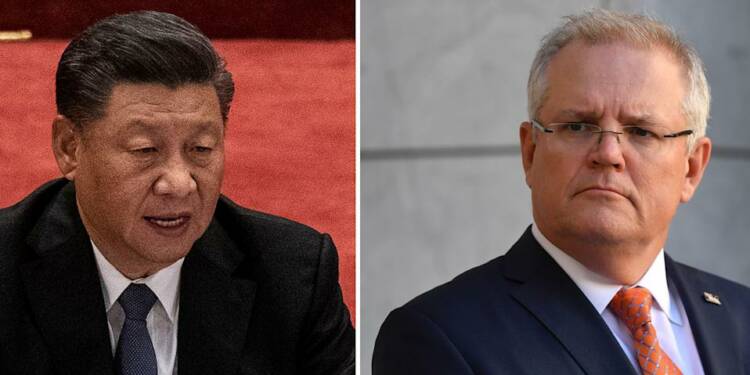 If there is a country, which is truly facing economic warfare from China, it has to be Australia. For over a year, China has been trying to weaponise its heavy volume of imports from Australia to punish the Scott Morrison government that has been pushing back against Chinese authoritarianism. Mostly, China’s economic coercion has backfired as Canberra has hurt Beijing at a bilateral level.

However, gloves have come off now and Morrison is mobilising the 38-member Organisation for Economic Co-operation and Development or the OECD against China. Morrison is taking on China’s economic warfare tactics at a global level. The idea is that since Australia has proven how it can tame Beijing’s intimidation tactics, it has the credibility to lead OECD members and other countries in the battle against Chinese bullying. ,

During his address to the Paris-based OECD, Morrison spoke about overcoming the China threat and battling the pressure of anti-market forces. The Australian Prime Minister warned that rising tensions in the Indo-Pacific were a threat to the financial prosperity of other nations and urged the leaders in attendance to “defend a world order that supports freedom”.

Morrison said, “The global trading system and rules-based order is under serious strain and threat.” He added, “Meeting these challenges will require a degree of active cooperation not seen for many decades.”

And in a clear bid to show how Canberra can lead the way, Morrison said, “Australia’s prosperity rests squarely on maintaining our position as an outward-looking, open trading economy. We will never overcome our present challenges by relinquishing the hard-won lessons of the past.”

Truth be told, Australia is the most capable world power to play the leadership role against China’s economic intimidation. Under Scott Morrison’s leadership, Canberra has not only managed to come out unscathed in face of China’s relentless economic warfare, but has also managed to hurt the Communist nation.

Last year, China had imposed tariffs and unofficial bans on a range of Australian products including barley, wine and coal, following a serious diplomatic rift between Canberra and Beijing over the origins of the Coronavirus Pandemic and growing Chinese belligerence. Beijing simply went ballistic and Chinese President Xi Jinping made it a personal agenda to punish Canberra by cutting down imports of Australian goods.

China thought that it would exploit Australian sectors dependent on the Chinese market. But things started going south for China, when Australia shifted trade to friendly destinations like India and Vietnam. Take the case of Australian barley, for example. Canberra is looking to target the Indian and Vietnamese markets for barley exports over the next 10 years.

Australian Export Grains Innovation Centre (AEGIC) barley markets manager Mary Raynes said, “Twenty per cent of that (India’s) population will be under the age of 25 (by 2030) and it is estimated the country will produce around 5.6 billion litres of beer.” Raynes added, “We will only have a share of the Indian market – it will have a capacity of around 650,000t of malt, which equates to about 687,000t of barley and will have a portion of that market.”

Vietnam too is expected to require 330,000t of malting barley by 2030. India and Vietnam are developing a great thirst for beer and Australia wants to use its barley for quenching this thirst, which effectively neutralizes the effect of Chinese barley tariffs.

Similarly, in sectors like coal and iron ore, China and not Australia, is the biggest loser. Jinping’s battles against Canberra led to an unofficial ban on Australian coal imports in China. But China’s power sector is quite clearly dependent on Australian coal. The net effect was that lights went out in many places in China as the power sector struggled on account of coal deficiency.

Last winter, many places in China were shivering as heating devices couldn’t function due to power outages. And even today, China is battling a power crunch amidst the hot weather conditions.

Meanwhile, China’s steel mills are the worst hit. To be clear, Beijing never imposed tariffs on Australian iron ore, because there is no substitute for the product. China imports 60 per cent of its iron ore from Australia and the Chinese demand for Australian iron ore isn’t going to decline anytime soon.

Yet, given the way things are between Australia and China, Canberra has also started searching new destinations for its iron ore. In fact, Australia recently confirmed India as the world’s fastest-growing steelmaker and iron ore importer out to 2026. Australia is looking to bank on India for sustaining its iron ore exports that presently go as high as over A$100 billion a year.

Also, Vietnam’s leading steelmaker Hoa Phat Group recently purchased the entire interest in an Australian iron ore mine, which shows how a large chunk of future iron ore production down under will also go towards Vietnam.

Ultimately, Chinese steel mills will face trouble and fail to secure enough iron ore for their survival. In fact, Jinping’s tariff wars against Australia has already spiked iron ore and other commodity prices in China. This is why Xi has also started cracking down on so-called monopolies in commodities markets, the spread of false information and hoarding, to bring down the rising prices.

All in all, Australia hasn’t lost anything. Higher iron ore prices have sustained Australian exports despite Chinese tariffs. For future growth, Australia is successfully exploring new markets. If anyone has suffered, it has to be Jinping’s China. This serves as an endorsement of Morrison’s credibility to defeat China’s intimidation tactics. He has already handled China at a one-on-one level and now he wants to bruise the Communist nation at a global level.

49-year-old Bennett could have been Netanyahu’s long-term successor, but his shortsightedness will cost him his political career