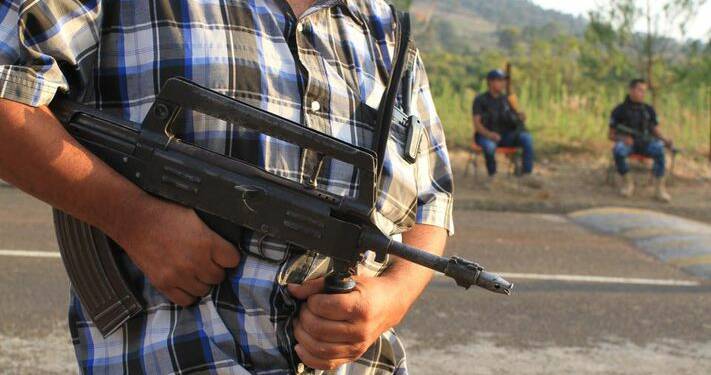 Weapons in the USA are a fundamental right and an example of the freedom of the country. And while the citizens are being asked to give away their weapons, the gangs are still equipped with illegal weapons which the US government has zero jurisdiction over. Gangs are in possession of thousands of US military Rockets launchers and guns, but Biden is more interested in disarming law-abiding civilians.

When authorities in California’s agricultural heartland went to investigate a domestic assault case, they were not seeking a military assault rifle, but they found one. The AK-74 was discovered in the garage of a Spanish-tiled home in Fresno by authorities. Its banana-shaped magazine, which was loaded with 20 bullets, was found in a neighbouring storage container. The AK-74 is comparable to its more well-known cousin, the AK-47. The gun found by accident in 2019 is federally classified as a fully automatic weapon, making it difficult to buy lawfully as a civilian in the United States.

This one was stolen eight years before from Fort Irwin, a base in California’s Mojave Desert where many soldiers trained before tours in Iraq and Afghanistan. In the first public accounting of its kind in decades, an Associated Press investigation has found that at least 1,900 U.S. military firearms were lost or stolen during the 2010s, with some resurfacing in violent crimes. Because some armed services have suppressed the release of basic information, AP’s total is a certain undercount.

Government records covering the Army, Marine Corps, Navy and Air Force show pistols, machine guns, shotguns and automatic assault rifles have vanished from armouries, supply warehouses, Navy warships, firing ranges and other places where they were used, stored or transported. These weapons of war disappeared because of unlocked doors, sleeping troops, a surveillance system that did not record, break-ins and other security lapses that, until now, have not been publicly reported.

On Tuesday, in the wake of the AP investigation, Army Secretary Christine Wormuth told a hearing of the Senate Armed Services Committee that she would be open to new oversight on weapons accountability. The Pentagon used to share annual updates about stolen weapons with Congress, but the requirement to do so ended years ago and public accountability has slipped.

“There must be full accountability in Congress with regular reporting of missing or stolen weapons,” Sen. Richard Blumenthal, D-Conn., said in an interview. In a written statement, Pentagon spokeswoman Commander Candice Tresch told AP that the Defense Department “looks forward to continuing to work with Congress to ensure appropriate oversight.”

Read More: The Chinese defector to the US who forced Biden to change his line on the Lab leak theory

The house owner was a member of the Fresno Bulldogs, a street gang in Fresno. In an internal interview, Sgt. John Rodriguez revealed he joined the gang as a fifth-grader but was no longer active. That was four months before the heist of 26 AK-74s and a sniper weapon in March 2011. Rodriguez and Pfc. Harvey DelValle II drove approximately 300 miles to Fresno to discharge their cargo after the heist. The two soldiers began calling possible buyers at the residence of an associate. This was how conflict weapons found their way onto Fresno’s streets. The weapons were among at least 1,900 U.S. military firearms lost or stolen in the last decade, according to an Associated Press investigation.

Theft or loss happens more than the Army has publicly acknowledged. During an initial interview, Miller significantly understated the extent to which weapons disappear, citing records that report only a few hundred missing rifles and handguns. But an internal analysis AP obtained, done by the Army’s Office of the Provost Marshal General, tallied 1,303 firearms. So while the gangs are in possession of thousands of US military rockets, launchers and guns, Biden is more interested in disarming law-abiding civilians.