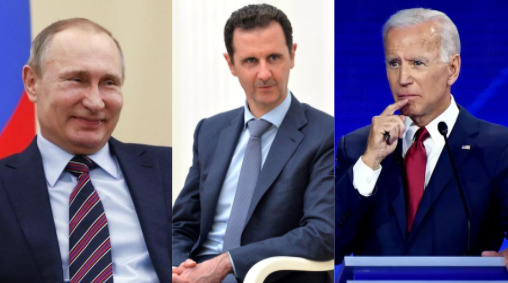 TFIGlobal had already reported how Biden’s Syria policy and intention to make it a part of Russia-US talks would be a matter of utter humiliation. Guess what? Biden did bring up Syria in his meeting with Putin, and Putin did what he does best- embarrass US President Joe Biden publicly.

At the outset, let us make it very clear that today Syria is predominantly under the control of President Bashar al-Assad’s regime, which receives strong backing from Moscow. The militant groups have been knocked out almost completely and the Islamic State of Iraq and Syria (ISIS) too doesn’t exercise much influence in the war-torn country now.

For the establishment politicians in the US and the Obama-era propagandists, a peaceful Syria under the control of Bashar al-Assad is a PR disaster. The Obama-Biden administration had gone into overdrive, vilifying Assad and making bizarre allegations about the Syrian President cracking down on his own people.

However, now when Syria seems peaceful and stable, Syria’s President Bashar al-Assad seems strong and certainly much more popular than what he was projected to be by the Obama-era officials. You no longer get to hear the kind of things about Assad, which used to circulate when the Obama administration was looking to intervene in Syria.

For Biden, who had served as the Vice President in the Obama administration, bringing Syria back into the limelight and making Assad a contentious figure all over again is thus a legacy obligation.

Therefore, when Biden and Putin met in Geneva, a compulsive US President brought in a new matter of discussion- Syria. White House’s decision to keep open the last UN aid crossing into Syria, in a rebel-held Northwest part of Syria called Idlib, was discussed. Under the terms of a UNSC resolution, the UN aid programme is set to close on July 10. But Biden wants to keep it open.

In a follow-up press conference after the Putin-Biden summit, the US President claimed that the effort to keep aid flowing in Northwest Syria is part of “the urgent need to preserve and reopen the humanitarian corridors in Syria.”

But Putin shot back and pointed out that “[Humanitarian] assistance should be given through the central government.”

With his subtle remark, the Russian President pointed out that Idlib, which the Biden administration wants to fund, is not under the control of the internationally recognised Assad regime. Rather, Idlib is controlled by a terrorist faction that carries no validity or recognition on international platforms. The terrorist faction stones women to death and slaughters religious minorities as a part of its functioning mechanism.

Still worse, there is no regulation or scrutiny of money flowing into Idlib in the name of humanitarian assistance, so you can assume just how unnecessary and counter-productive American aid in Northwest Syria can be.

Make no mistake, Syria is doing well under Assad. The best the US can do is sit out instead of trying “to preserve and reopen” humanitarian corridors, because the last time the US did something like that, Syria fell into a civil war and ultimately, an organisation called ISIS came into being. And this is exactly what Putin wants Biden to know.

Biden’s Syria policy is disastrous and does more harm than good to the region. If the US President doesn’t mend his ways, he will head towards a major embarrassment.