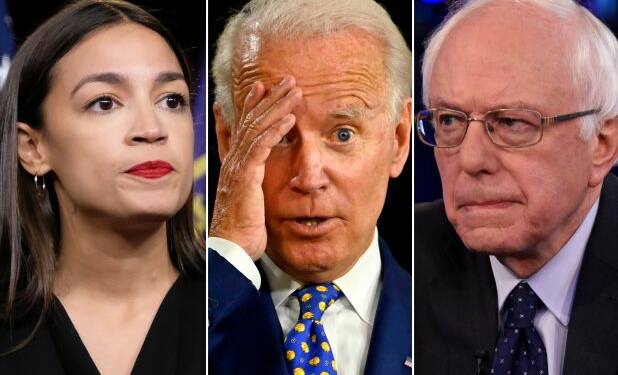 Senator Bernie Sanders of Vermont warned on Sunday that if the bipartisan infrastructure package includes provisions like hiking the gas tax or imposing a price on electric vehicles, he would vote no. The comment illustrates that, while courting Republicans to craft a bipartisan bill, Democrats risk losing progressive support in a 50-50 Senate.

Bernie Sanders belongs to the progressive wing of the Democrat party. He is one of the most staunch socialist in the Democrat. Others include Ilhan Omar, Alexandria Ocasio Cortez and Rashida Tlaib. Collectively these staunch left-leaning democrats have been breathing down the neck of US President Joe Biden, his administration and the Democrat party. With the 2022 mid-term elections on the horizon, the Democrats are pushing to get their legislation passed through both houses. But in the senate which is split 50-50, the progressive democrats hold a lot of clout. The Progressives have been rebuking the Biden administration on a number of issues, including immigration, infrastructure, China and Israel.  If the Democrats lose the faith of the progressives they would be unable to push through with their election promises which would severely hamper their chances of holding a majority after the mid-term elections.

Twenty-one senators, including 11 Republicans, have laid out a bipartisan plan that would cost $973 billion over five years or $1.2 trillion over eight years. The plan would spend $579 billion extra money, repurposing unspent Covid relief monies, imposing an electric car levy, and expanding the use of state and municipal funding for coronavirus relief.

Sanders retorted to provisions such as an increase in the gas tax and a price on electric vehicles, but said the idea was “mostly good.” He said, “What is in the bipartisan bill in terms of spending is, from what I can see, mostly good,” Sanders said. “One of the concerns that I do have about the bipartisan bill is how they are going to pay for their proposals, and they’re not clear yet. I don’t know that they even know yet, but some of the speculation is raising a gas tax, which I don’t support, a fee on electric vehicles, privatization of infrastructure, those are proposals that I would not support.”

Sen. Rob Portman (R-Ohio), one of the leaders of the bipartisan group proposing the $6 trillion plan, responded to Sanders’ remarks by calling it a “grab bag of progressive priorities.” “It’s not about infrastructure. It’s kind of a $6 trillion grab bag of progressive priorities,” Portman said on “Meet the Press.” “Ours is about core infrastructure, and it is paid for.”

Bernie has a sway over the Biden campaign. In truth, followers of Bernie Sanders have infiltrated Biden’s presidential campaign. Bernie Sanders was ultimately successful in hijacking Joe Biden’s campaign on critical topics such as illegal immigration and minimum wages. Bernie may appear to have faded into the background, yet he has remained important despite operating in the shadows.

Besides infrastructure, the issue of immigration has also been pushed forth by the progressives, and despite a border crisis at the southern US border they have kept pressurizing the Biden administration to raise the quota of immigrants despite Biden’s reluctance.  In April, Biden had kept the refugee quota for the fiscal year at Trump-era levels. But after increased pressure from progressive democrats, Biden had to increase the quota.

When it comes to dealing with China, the Biden administration had finally begun to follow Trump’s lead. Despite the fact that Biden began by antagonising Russia and being easy on China, the US President changed his tune. Biden, like his predecessor Donald Trump, was now attempting to boost relations with Russia while antagonising China.

But Biden will eventually reverse course because another thought process is running parallel to Biden’s latest tilt against China. We’re talking about Bernie Sanders’ pro-China stance, which has remained ideologically strong in the Democratic Party with his supporters, the “squad,” and other extreme progressives who want cooperation with China while refusing to abandon the antiquated war against Russia.

Moreover, when the Israel Hamas conflict broke out, Biden was forced from openly supporting Israel. The progressive democrats criticized Israel for defending itself and even gave rise to anti-semitic attacks in the United States.

The US became reeling with anti-Jew and anti-semitic actions and the pro-Palestinian protests mobs started attacking and targeting any Jew in sight. The intellectual and political backing that these groups got from the politically left-liberal factions of the Democrat party emboldened them. Whether it was Alexandria Ocasio-Cortez, Ilhan Omar, Rashida Tlaib, or Bernie Sanders, the Democratic Party’s extreme left-wing vehemently normalised the anti-Semitic agenda.

With all these actions hurting the United States and their citizens one way or the other it’d not be long when the actions of these progressive democrats will lead to the Democrats losing out on the majority in the Senate and the Congress and the progressive will be the reason behind it.