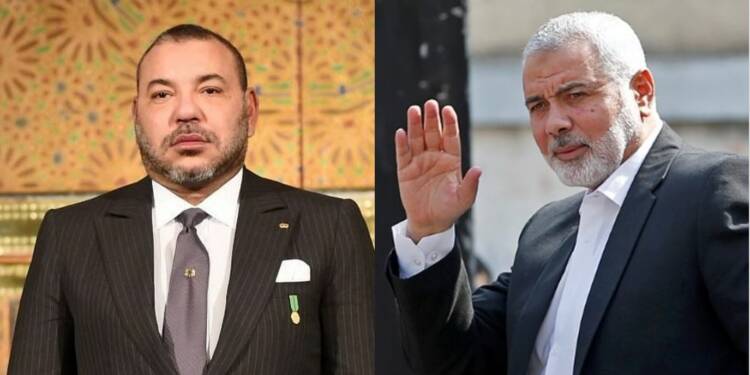 Hamas, the Palestinian Islamic Resistance Movement, has sent a delegation to Morocco to engage with Moroccan political figures. Ismail Haniyeh, the director of Hamas’ political department, led the trip. The latest developments in occupied Palestine following Israel’s military attack against the Gaza Strip last month were on the table for discussion.

Morocco normalised relations with Israel late last year in exchange for the United States’ recognition of its sovereignty over Western Sahara, where it has been at odds with the Algeria-backed separatist Polisario organisation since 1975. Morocco also became the only Abraham accord state to criticize Israel as demonstrations and protests were held in the state.

Haniyeh and the Hamas delegation met with officials from the Moroccan parliament and political parties, as well as the Bayt Mal Al-Quds Agency, which was led by Morocco’s King Mohammed VI. The organisation aids the occupied city of Jerusalem. Last Friday, the king held a dinner for the Palestinian delegation at the Hospitality Palace in Rabat.

Hamas spokesman Sami Abu Zuhri, who is among the delegation, said that “The visit to Morocco is an outstanding step forward for the Kingdom’s support for the Palestinian cause. This can only reflect the steadfastness of the Palestinian people and the triumphs of the resistance.”

In exclusive statements to Arabi21, Abu Zuhri said that “All the meetings we held with Moroccan officials or party leaders confirm the extent to which Morocco embraces the Palestinian cause, both at the official and popular levels. We believe that this visit will establish a new stage in the development of the Moroccan stance on the Palestinian cause.”

The Hamas official expressed the movement’s gratitude to King Mohammed, the Moroccan government, and the other parties involved in sponsoring and ensuring the visit’s success.

This was very much a state visit, according to Moroccan writer and journalist Noureddine Lachhab. He noted that the Israeli offensive was initiated because Hamas wants to defend Jerusalem and that Morocco, through Amir Al-Mu’minin, is the chairman of the Jerusalem Committee (Commander of the Faithful). The Hamas leadership’s rhetoric in its fight against the Israeli occupation has a patriotic tone to it.

“Morocco has never attacked the Palestinian resistance or any of its factions,” Lachhab noted, “hosting this visit is consistent with Morocco’s principled position on the Palestinian cause and the two-state solution.” Furthermore, he stated that the kind reception Haniyeh and his colleagues received from the President of the House of Councillors, the Speaker of Parliament, and political party leaders could help Hamas reconcile its relations with the West.

“We have to admit that Hamas after the recent war on Jerusalem and Gaza is not the same Hamas before the war,” he concluded. “Of course, in no way does this mean that Morocco disparages the leadership of the Palestinian Authority.”

Hamas is also looking for political advancements in Palestine as it wants to oust the Palestinian authority leadership. Palestinian President Mahmoud Abbas had delayed the parliamentary and presidential elections in April in a bid to hold on to power. After which Hamas was involved in 11 days of violent conflict with Israel. The conflict with Israel has increased the influence of Hamas in Palestine, thus visiting Morocco also gives it a reason to seek international cooperation and legitimacy.

This is the first formal visit to Morocco by a senior Hamas delegation. It was part of a tour of the Arab world to rally support for the Palestinian struggle in the face of occupation, particularly the difficulties in Jerusalem. Yesterday, the delegation arrived in Mauritania.