Trump ensured China was kicked out of Tanzania port project. Now with Biden in power, China is reviving the deal 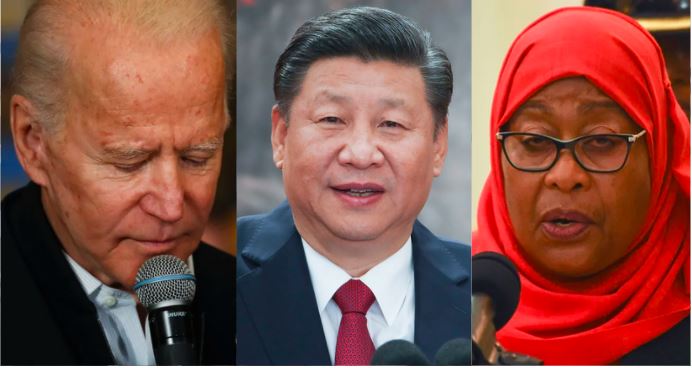 Ever since he got elected, Joe Biden keeps claiming ‘America is back’. But look around and you will know that it is China, which is actually coming back, after Biden’s accession to power. Tanzania, a strategically located East African nation, is yet another example of how Biden’s rise to power in Washington, DC is empowering China’s re-emergence at a global level.

Chinese President Xi Jinping has been eyeing the development of the Bagamoyo port in Tanzania ever since he came to power. But with Donald Trump in power, Xi Jinping’s China failed to woo Tanzania and the port deal negotiations failed completely in 2019. However, now with Biden’s accession to power and Washington’s consequent failure to push back against Chinese hegemony, Tanzania is once again discussing the possibility of a $10 billion deal with China to develop the Bagamoyo port.

After Xi Jinping came to power, Africa immediately became a part of his global domination dreams. In fact, Tanzania was one of the first countries that Xi Jinping visited as China’s President. Beijing’s fascination with Tanzania is quite natural.

Jinping reaped initial success with the then President of Tanzania Jakaya Kikwete. The two leaders agreed upon a framework agreement between China Merchants Holdings International, China’s largest port operator, and the government of Tanzania in order to make a road map for the ambitious port project worth $10 billion.

In 2013, it was alright for Tanzania to accept Chinese investment. At that time, China was a rising power and as such, it didn’t share a contentious relationship with the United States of America. But things started changing after Trump assumed office as the US President in 2017. As the US President, Donald Trump was easily the biggest anti-China hawk the world had seen in a long time.

Trump’s Indo-Pacific policy was such that all the countries in the region were prompted to distance themselves from China. In 2019, China Merchants Holdings disclosed that years of negotiations between the two sides failed to produce an agreement on the Bagamoyo port.

On the other hand, Tanzania President John Magufuli made some more insightful remarks about the cancellation of the $10 billion Chinese loans to develop the Bagamoyo port. He said that “only a madman” would agree to the conditions of the Bagamoyo port deal.

There are two main conditions that irked the former Tanzania President. Firstly, China would build the port on the condition of getting 30 years to guarantee the loan along with an uninterrupted lease for 99 years. Secondly, China demanded that Tanzania would not raise a concern about whoever invested in the port. This implied that China could use the port for any purpose, including as a naval base, and Tanzania wouldn’t have a right to question Beijing.

Mugafuli had rightly called the terms of the deal “exploitative and awkward”. Also, China wanted that Tanzania doesn’t build any other port from Tanga in the north to Mtwara in the south once the construction of Bagamoyo port was completed. Again, it meant that China wanted complete autonomy in a part of Tanzania’s territory in order to avoid any competition. Beijing was actually looking to belittle Tanzania’s status as a sovereign nation.

Yet, Trump’s success in driving Tanzania away from China hasn’t lasted for too long. Tanzania’s former President John Magufuli passed away recently and the new President Samia Suluhu Hassan has said that the country will look to revive the port project.

At a gathering of the Tanzania National Business Council, Hassan said, “Regarding the Bagamoyo Port project, let me give you the good news that we have started talks to revive the whole project.”

She added, “We are going to start talks with the investors that came for the project with the aim of opening it for the benefit of our nation.”

As per Xinhua, during his telephonic conversation with Hassan, Jinping said, “China is ready to work with Tanzania to consolidate political mutual trust, strengthen mutual support.”

Jinping added, “China always views and develops the China-Tanzania relations from a strategic and long-term perspective and firmly supports Tanzania in taking the development path in line with its national conditions.”

Now, Tanzania seems to be warming up to China all over again. The change of leadership in the East African country might have a role to play, but it would be imprudent to discount the role that Joe Biden has to play. Make no mistake, as long as Trump was in power, he ensured that China was totally ruled out of the Indian Ocean Region (IOR), while India’s role as a central power in the region was upheld. So, Trump’s policy desisted developing or underdeveloped countries like Tanzania from getting too close to Beijing.

However, Biden has been a confused leader at the best. Instead of pushing back against Chinese expansion in the IOR, he has been challenging and undermining the interests of US allies like India in the region. Countries like Tanzania, of course, take the wrong signal when a US President behaves like this.

Biden’s failure to check China is now leading to strategic disasters. Biden’s soft approach towards Beijing is leading to the paper dragon’s re-emergence and Tanzania is the first country falling prey to growing Chinese influence all over again.

Trump was right. Company insiders warn against Biden administration on his TikTok policy