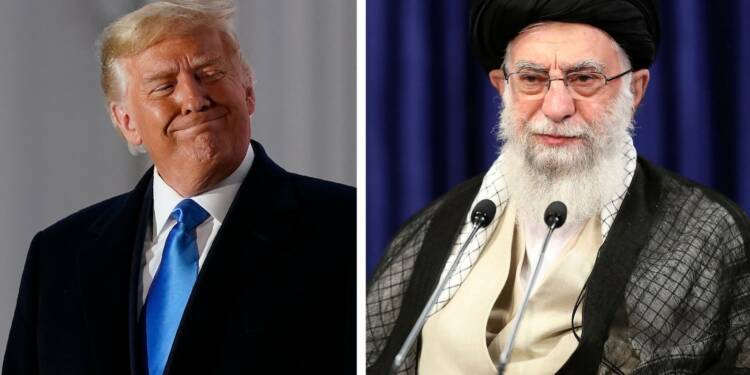 Iran’s biggest enemy, former US President Donald Trump, is no longer in power. But guess what, Iran will never recover from the damage inflicted by Trump. With a friendly regime in Washington, D.C., Iran can revive the Joint Comprehensive Plan of Action (JCPOA), which was scrapped by Trump. But it seems that even if the 2015 Iran nuclear deal is revived, it will not translate into any big gains for the Iranian economy.

Truth be told, former US President Donald Trump didn’t only scrap the JCPOA and re-impose sanctions on Iran, but he also robbed the country of all its political or economic credibility in the process. Due to what Trump did, no corporate giant would be able able to trust Iran again, even if the Shi’ite nation is freed from all the sanctions imposed against it.

Donald Trump destroyed Iran politically and economically. People who were involved in Iran’s economic boom during the JCPOA days between 2015 to 2018 too realised the perils of getting involved in the Shi’ite nation.

Asia Times quoted Mohsen Tavakol, a nonresident senior fellow at the Atlantic Council’s Middle East programs, as saying, “I don’t anticipate a fresh influx of foreign investments into Iran any time soon, as many foreign firms, both industrial and financial ones, that got engaged in Iran during the glory days of the JCPOA between 2015-2018 incurred great losses when they had to exit Iran due to re-imposed US sanctions and the US withdrawal from the JCPOA.”

Tavakol concluded, “Like in any other country, a stable political and economic environment is needed for both domestic and foreign firms to function properly and there is yet no indication that the election of Raisi or re-entering the JCPOA would promote and guarantee such a stable environment.”

Now, with a radical President-elect like Ebrahim Raisi waiting to assume office in Iran, not much needs to be said about the political and economic environment in the country. Raisi, who is infamously called the “butcher of Tehran”, doesn’t have any experience in State craft. He seemingly got elected due to his proximity and ideological semblance to Iranian Supreme Leader Ayatollah Ali Khamenei.

Once, Ebrahim Raisi takes charge of affairs, he is likely to pursue Iran’s ballistic missile program and intensify support for regional militias. With Raisi, Tehran’s relations with the Arab world and the West are only going to worsen, which means still less political and economic stability in Iran. Ultimately, foreign and domestic businesses are going to remain wary of investing in the Shi’ite nation.

You never know what a radical Iranian President may do to annoy the US, even if the nuclear deal does get revived. And no corporate giant would be ready to take the fall by investing in a rogue regime.

The growing disillusionment with Iran as an investment destination is quite natural. Donald Trump’s hard-hitting sanctions has corrupted the Iranian political establishment and bureaucracy. Presently, Iran is facing hyperinflation and a severe currency crisis. Still worse, the country spends billions of Dollars every year, only for circumventing sanctions. Iran has been circumventing sanctions for 16 years, with a brief hiatus between 2015 to 2018 when the JCPOA was in force.

Abbas Akhoundi, a pro-reform Iranian politician and the former minister of roads and urban development, warns  “when this situation has persisted for 16 years, it has actually been institutionalized and has serious beneficiaries … these beneficiaries are trying to maintain the status quo.”

In fact, there are many hardliners close to Ayatollah who claim that sanctions are a blessing in disguise, because they have propelled self-sufficiency apart from boosting domestic consumption. But Ali Abootalebi, a professor of Middle Eastern and global politics, disagrees.

Abootalebi said, “The slogan that sanctions are a blessing in disguise is just that, a slogan. Raisi and other hardliners know this as well. The Iranian ruling class is aware that they can promote self-sufficiency in local production, management and innovation while engaging the West. It is all a matter of economic management and leadership.”

The US-based academic added vast discrepancy between the official and black market exchange rate is the biggest driver of corruption and economic distortion in Iran.

Years of US sanctions has created a situation in Iran, where the establishment itself wants to maintain the status quo. The Iranian establishment is a beneficiary of American sanctions, even if they hurt the Iranian economy. Let’s face it, not many businesses would be ready to deal with such a political system.

Within Iran, there is not much real enthusiasm for reviving the 2015 nuclear deal, even though Tehran uses the issue as a strong bargaining chip against the Biden administration. Make no mistake, several years of Trump administration sanctions have irreversibly impaired the Iranian economy and even a nuclear deal won’t help the Shi’ite nation now.