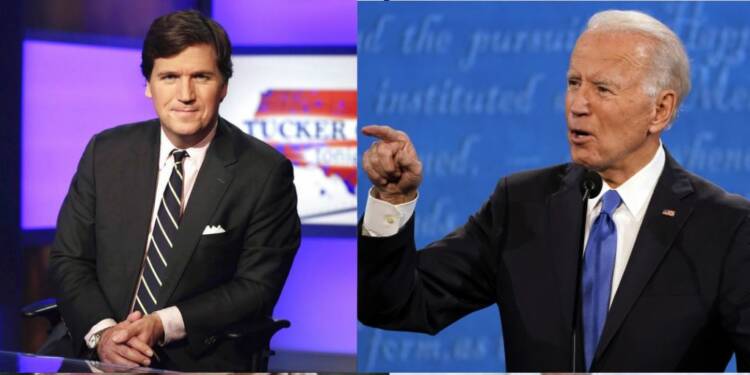 US President Joe Biden seems to be really afraid of one of his fiercest critics, Fox News host Tucker Carlson. Biden fears Carlson, because the Fox News host is a true American patriot who routinely exposes Biden’s policy failures over issues like the immigration crisis and identity politics. In fact, Biden is so afraid that he is alleged to have used intelligence services for spying on Carlson.

The Fox News host said, “It’s not just political protesters the government is spying on, yesterday, we heard from a whistleblower within the US government who reached out to warn us that the NSA, the National Security Agency, is monitoring our electronic communications and is planning to leak them in an attempt to take this show off the air.”

Tucker Carlson says a whistleblower told him that he is being spied on by the NSA and that he filed a FOIA request for information:

"The Biden administration is spying on us. We have confirmed that." pic.twitter.com/LY2vmDLFTK

The Fox News host has pushed his allegation against the Biden administration vociferously. He said, “Now, that’s a shocking claim and ordinarily would be skeptical of it. It’s illegal for the NSA to spy on American citizens. It’s a crime. It’s not a third-world country. Things like that should not happen in America. But unfortunately, they do happen, and in this case, they did happen.”

Carlson added, “The whistleblower who is in a position to know repeated back to us information about a story that we are working on that could have only come directly from my texts and emails.”

The Fox News host is also pursuing the case. He revealed, “we filed an FOIA request of Freedom of Information Act request asking for all information that the NSA and other agencies have gathered about this show.”

Well, there are a number of reasons why the Biden administration would actually want to have Tucker Carlson off air. The Fox News host was amongst the first US journalists to expose how Biden administration’s poor border management and populist migration policies created a humanitarian crisis on the southern US border.

Guests like Texas Sheriff A.J. Louderback appeared on  “Tucker Carlson Tonight”, who corroborated serious border mismanagement by the Biden administration.  Louderback himself confirmed reports of illegal aliens being released from custody into the United States and that too without being tested for COVID-19.

Carlson also exposed how the Biden administration was interfering in the operation of the Immigration and Customs Enforcement (ICE), by forcing the federal department to “stop all removals”.

In fact, Biden fears Tucker Carlson, because the popular Fox News host never tries to be politically correct. He provides a voice to the people who have been ostracised, called names and left with no one who listens to them. Carlson even went as far as slamming Joe Biden’s detestable attempts to bring identity politics into the US military and encouraging “maternity flight suits.”

While the left-liberal media was swooning over Biden’s efforts to diversify the US military forces, Carlson was one of the few journalists who stayed reasonable. In his talk show, Carlson made it clear that the military’s primary goal is to win battles, and not to promote social justice. He said, “So we’ve got new hairstyles and maternity flight suits… Pregnant women are going to fight our wars. It’s a mockery of the US military.”

Leftists already hate Tucker Carlson for his honesty and ability to expose their nefarious agenda. Carlson’s far-left haters had even dragged the US military into their smear campaign against the Fox News host. Shockingly, one of the US Marine Corps units had even tweeted statements insulting Carlson.

Tucker Carlson has been insulted and called names by radical progressives and far-left thinkers close to the Democratic Party. Yet, the Fox News host has remained undeterred. He has exposed the Biden administration, every single time it went wrong with its policies. And now, the incumbent US President seems so afraid of the Fox News host that he allegedly made an attempt to take him off air.