Pelosi in Catch 22 situation: The prospects of Jan 6 riots report look absolutely dim for the Democrats 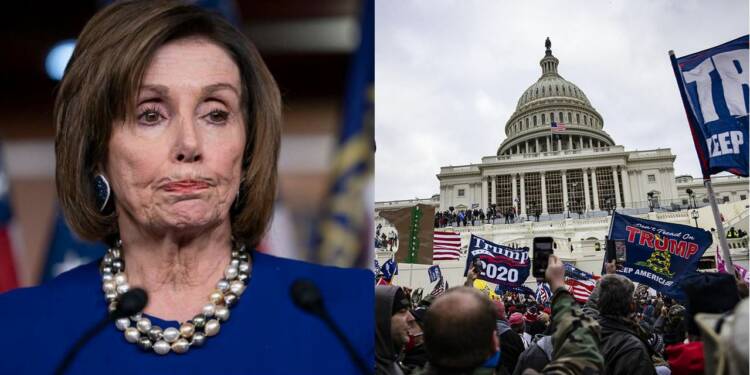 Democrats sought an outside group of specialists to look into the Jan. 6 uprising. Instead, they may have to deal with the House GOP’s Trump wing. The House of Representatives voted 222 to 190 on Wednesday to establish a select committee with a broad scope to investigate the greatest attack on the Capitol since the War of 1812. Reps. Liz Cheney (R-Wyo.) and Adam Kinzinger (R-Ill.) were the only Republicans who voted in favour of creating the committee.

However, as Democrats finalise their list, neither party knows whether Republicans, if any, will join them – a choice that will have a significant impact on the investigation’s trajectory. If House Minority Leader Kevin McCarthy names any GOP members to the panel, Speaker Nancy Pelosi will have the last say. Many in her caucus, though, are concerned that Republicans would try to appoint members who voted against recognising President Joe Biden’s victory, which can ignite yet another nasty debate.

“The issue is that … there are indications that some of these folks were in on it. And we can’t have folks who were in on it in the investigation,” Rep. Alexandria Ocasio-Cortez (D-N.Y.) said in an interview. “If we are to be serious about finding out the truth, it seems incongruous to appoint people to a fact-finding committee who have really leaned into the big lie,” added Rep. Mondaire Jones (D-N.Y.)

House Speaker Nancy Pelosi has conveyed that she would want at least one Republican to be part of her picks in the Jan. 6 Republican committee.  Democrats speculate that strong Trump critics like Cheney and Kinzinger could be picked as one of Pelosi’s eight selections to the Jan. 6 committee. The speaker refused to specify whether she would veto any members of the GOP select panel who opposed certifying Biden’s victory on Tuesday, and she refused to address the committee’s makeup again on Wednesday. “I will make whatever statement I make about the select committee when I do,” Pelosi told reporters ahead of the vote, which will take place nearly six months after the brutal incident. Many members who were detained in the chamber that day, as well as members of the Capitol Police and D.C. Metropolitan Police who were invited by Pelosi’s office, were moved by the vote.

Many Republicans who have openly lambasted Trump for his role in the Jan. 6 assaults, including voting to impeach him, have publicly stated that they do not want to serve on the committee and voted against its formation on the House floor on Wednesday. Rep. Jaime Herrera Beutler (R-Washington), who voted to impeach Trump and exposed details of a critical conversation between McCarthy and Trump, stated in a statement on Tuesday that she would oppose and not serve on the ‘partisan’ select committee. Kinzinger, on the other hand, stated in a statement on Wednesday that he voted for it “because the truth is important.”

After Senate Republicans filibustered the independent commission, Cheney said in a statement that the select committee was the “sole remaining choice.” Trump, according to the former member of the House Republican leadership, “made the same words that provoked violence before, on an almost daily basis,” he said.

Even as far-right Trump supporters like Reps. Marjorie Taylor Greene (R-Ga.) and Matt Gaetz (R-Fla.) raise their hands to be chosen, GOP leaders are remaining tight-lipped about how much they will engage on the select committee. Despite one Democrat’s assertion that several Republicans led pre-riot ‘reconnaissance tours’, there is no evidence that they or any other GOP members were personally involved in plotting the Jan. 6 attack.

McCarthy has frequently declined to comment on who he would appoint for the panel when asked about his five choices. He may even choose not to appoint members at all, a move that might enable the GOP leader to dodge a contentious issue inside his own party. Two-thirds of their roughly 200-member conference voted against certifying the president’s Electoral College victory. McCarthy’s most inflammatory members, conservatives, who are also most likely to utilise their committee seats to defend Trump, have been dreaded by some Democrats. Greene, Gaetz, and Rep. Lauren Boebert (R-Colo.) are among the members of this group, according to several House Democrats, who would want to effectively destroy the panel’s work.

Rep. Madeleine Dean (D-Pa.), who prosecuted Trump in his post-insurgency impeachment hearing, remarked, “What I wanted was an impartial commission.” “Of course there will be Republicans on this board… They will show themselves, whether to fulfil their responsibilities or not. It’s all up to them.”

Rep. Brian Fitzpatrick (R-Pa.), a co-chair of the Problem Solvers Caucus, which backed the commission, said the bipartisan panel’s structure was logical but questioned the select committee’s political orientation. “I don’t know if the public is going to have confidence when the rules of the game are skewed the way they are,” he said. Asked if he had concerns about who McCarthy appointed, Fitzpatrick said: “That’s part of the problem with the way this plan appears to be moving forward.”

Ethiopia is the latest flashpoint in the ongoing US-Russia Cold War 2.0