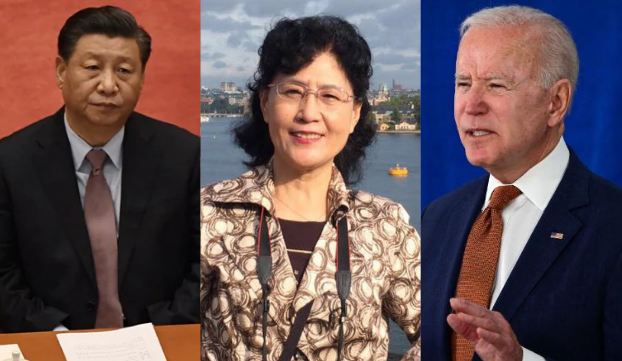 “From 1949 to the present, the Chinese Communist Party (CCP) has persistently cultivated anti-American sentiment,” CCP insider and retired professor Cai Xia stated in an article released on June 29 by the Hoover Institution. “The terms I have been most familiar with since kindergarten and primary school are expressions like ‘stop the American imperialist wolves,’” she said of her childhood in communist China. These views are alien to the Democrats who, under Joe Biden, have been trying to talk things out with CCP. While the Chinese Communist Party has been constantly fooling the USA, Joe Biden and his administration are making naïve attempts as per Cai Xia.

As per her assessment and the Epoch Times report based on the same, because the CCP dictatorship regards the United States as an enemy, it will use all means possible to benefit from America. Cai claimed that the CCP took advantage of possibilities for economic and cultural interactions to stealthily obtain economic, commercial, technological, political, and military intelligence, believing that “there can never be too much deception in war.” Theft of high-tech research results, in example, is carried out not just in foreign enterprises within China, but also by Chinese students and scholars who travel abroad and may be asked to ‘cooperate’ with specific agencies in order to filch various information.”

Unknown of these facts, US President Joe Biden is quite shamelessly exposing himself as weak and incapable in face of China’s belligerence and stubbornness. Biden keeps using silly rhetoric- holding China accountable to follow rules. But the thing is Beijing doesn’t give two hoots when it comes to following rules. A weak Biden is releasing this the hard way as he simply cannot force China to have nuclear talks.

Read more: A weak Biden is trying to have nuclear talks with China, but China is not relenting

On Tuesday, the United States Disarmament Ambassador Robert Wood told a U.N. conference that China is resisting bilateral talks with the Biden administration on nuclear weapons. Wood said, “Despite the PRC’s dramatic build-up of its nuclear arsenal, unfortunately, it continues to resist discussing nuclear risk reduction bilaterally with the United States.”

Despite the fact that the CCP has defrauded Americans for over 40 years, many United States elites “still perceive the CCP regime as authoritarian,” Cai quit. She cautioned them that they had failed to recognise that “China has evolved into a polished type of neo-totalitarianism.” “They clung to engagement, relying on unilateral good wishes and illusions, which caused the policy to have a certain ‘appeasement’ effect in reality,” Cai said of the US government’s dominant stance.

Cai claimed that the CCP leadership began to seek global dominance in 2008, when “China hosted the Olympic Games” and the United States “fell into the subprime financial crisis.” Since then, the CCP has attempted to participate in global rule-making bodies such as the World Trade Organization. It had also been preoccupied with developing a modern military “aimed at the United States,” increasing its abroad propaganda operations, and infiltrating overseas “media, finance, economy, technology, education, think tanks, museums, and other fields and institutions.” By making these claims and bringing out the insider facts, she has proven that China has been fooling The US all this while and Biden’s attempts are naïve at best and catastrophic at worst.