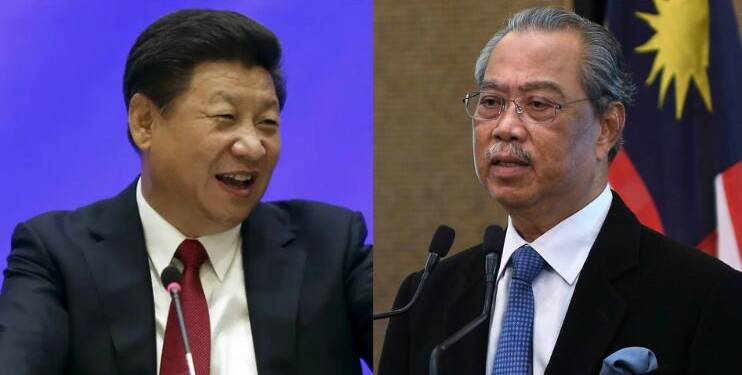 The air space violation by China of what is identified as Malaysia’s Maritime Zone (MMZ) has raised many eyebrows. The convoy of Chinese aircraft spanning over 60 kilometres was seen by many as a routine incursion by the People’s Liberation Army Air Force (PLAAF) – which has made a name for itself by intruding into the airspaces of independent and sovereign nations in the South China Sea. But when it flew its aircraft into the Malaysia Maritime Zone, the otherwise pro-China nation was shocked, and publicly lambasted the paper dragon for its aggression. The Chinese ambassador, meanwhile, was given a good dressing down in Kuala Lampur.

China had just played with a major Malaysian fault line. Invisible to the world, China demonstrated to Kuala Lampur that it could divide Malaysia into two halves, without the Southeast Asian country knowing what had hit it. Here’s what Malaysia looks like. The country is not a single landmass. In fact, the Southeast Asian country consists of two landmasses – separated by a 700-kilometre stretch of the South China Sea. Just above Singapore lies West Malaysia, while the middle landmass of Indonesia is crowned with East Malaysian states of Sarawak and Sabah.

Had Malaysia been a strong nation, united and not having to reel under intense fault lines of its own, the recent air incursion by China would have perhaps been given a pass. However, all is not well between West and East Malaysia. Calls for East Malaysia to secede from the Malaysian Federation are growing fast. In fact, elections are now being fought in the Eastern states of Sabah and Sarawak primarily on the issue of geographical identities, and local parties are making the leaders in Kuala Lampur, and West Malaysia at large seem like the enemy.

When the British left their remaining colonies in Southeast Asia and brought the Malaysian Federation into existence, Sabah and Sarawak were promised two things. Firstly, they were promised a wide range of political autonomy, and secondly, their economic development was to be the responsibility of Kuala Lampur. The southeast Asian country , however, has left its Eastern states – separated by 700 kilometres of sea, vastly underdeveloped. What’s worse, the resources of East Malaysia are used to feed the needs of West Malaysia. The stunning skyscrapers of Kuala Lampur, East Malaysians believe, are being paid for by money, which the federal government procures from their territory.

In terms of political autonomy, however, Kuala Lampur has made it a point to grant East Malaysians none. In the past 57 years, the federal government has stripped away a lot of local powers in Sabah and Sarawak. Add to that, the federal authorities have tried to impose the same toxic racial and religious politics found in West Malaysia on the eastern states, despite the fact that Sabah and Sarawak are far more ethnically diverse than Malaya.

East Malaysia also has vast resources of Palm oil. Malaysia’s palm-dependent economy is, therefore, driven by its Eastern states. Additionally, more than half of Malaysia’s gas production too comes from its eastern states. By all sane estimates, Sabah and Sarawak should have been flourishing much like Kuala Lampur and the remaining Malaya. However, they are lagging far behind – and its people are now growing sick of the discrimination.

China knows the inherent fault lines of Malaysia all too well. Therefore, its latest incursion around Sarawak was not aimed to tease Malaysia or assert its dominance over the MMZ. Rather, China delivered a message to Kuala Lampur, that it has the capability to split Malaysia into two halves. In any case, the people of East Malaysia are not fans of the federation. In strategic terms, freeing East Malaysia would add another client state to China’s hat.

By dividing Malaysia into two halves, China can dismantle the federation, while also earning an ally for itself in the region which survived on the crumbs thrown towards it by Beijing. The fact that China’s air incursion came days after a merry meeting between Malaysian Prime Minister Muhyiddin Yassin and Chinese Premier Li Keqiang only further aggravates Kuala Lampur’s worry of China dealing with West Malaysia as a separate entity while violating the airspace in East Malaysia.

According to an analysis by The Diplomat, “Although this incident appears relatively minor, Beijing effectively demonstrated to Malaysia that it could successfully split the country in two and that it has the capacity to support long-range air operations as far south as Malaysian Sarawak.”

Malaysia finds itself in a tight spot. It shares cordial relations with China, while Beijing is trying to split the country into two halves. Moving on, it would be interesting to see how Kuala Lampur deals with Beijing, now that it has come to know about Xi Jinping’s ulterior motives.