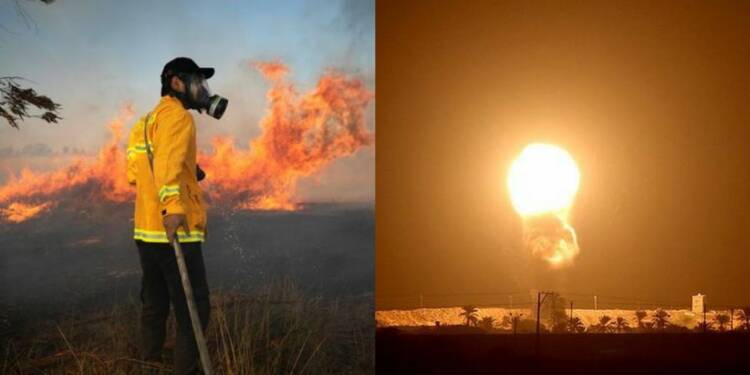 History is filled with examples of Israel never holding back on its revenge and as they say, it takes actions as and when it deems fit. According to the Israel Defense Forces (IDF), Israeli warplanes targeted a Hamas weapons plant in the Gaza Strip early Friday in retaliation to a wave of arson balloon attacks launched from the coastal enclave the day before. The response by the new government led by Prime Minister Naftali Bennett indicated a shift in policy from the previous one, which did not always respond to arson balloon attacks with airstrikes, and wouldn’t do so as quickly or as forcibly, in order to avoid escalation along the southern border.

The army said the Hamas weapons plant site was used by the terror organization to develop and build weapons.

“The strike was carried out in response to the arson balloon attacks on Israeli territory. The IDF will respond with determination against all terror attempts from the Gaza Strip,” the army said. There were no reports of casualties at the time. Incendiary balloons shot from Gaza on Thursday started four fires in Israeli villages along the border, breaking more than two weeks of silence since the previous round of arson attacks.

Earlier, IDF Chief of Staff Lt.-Gen. Aviv Kohavi had warned USA officials against rejoining the 2015 Iran nuclear deal, while in Washington to discuss the threat posed by Iran’s nuclear ambitions. It is a very rare move for an IDF chief to criticize USA foreign policy, given the close alliance between the USA and Israel. But the situation is such that Israel is constrained to issue an open warning to the USA.

IDF Spokesperson’s Unit issued a statement reading, “The Chief of the General Staff emphasized the shortcomings of the current nuclear agreement that will allow Iran to make significant progress related to centrifuges as well as to substantially enhance the amount and quality of enriched matter over the next few years, also emphasizing the lack of supervision in terms of nuclear proliferation.”

Arson balloons launched by Hamas operatives ignited 20 fires in Israeli villages on Gaza’s outskirts in June. IDF planes attacked a variety of Hamas military sites across the Gaza Strip in less than a day, responding to the strikes. The response of the current administration, led by Prime Minister Naftali Bennett, marked a policy shift from the previous one, which would not always respond to arson balloon assaults with airstrikes, and would not do so as fast or forcefully in order to avoid escalation along the southern border.

Bennett, who took over for Benjamin Netanyahu on June 13, had long advocated for a harder reaction to arson balloons, arguing in prior years that they should be considered the same as rockets, and that assaults on southern Israel should be handled the same as attacks on central Israel. Bennett, then the education minister, had asked for the IDF to try to kill all those launching assault balloons from Gaza in 2018, a plan that was opposed by the then IDF chief of staff Gadi Eisenkot.

When Bennett took charge as the Prime Minister, it seemed as if this approach will not be followed through, given the rainbow alliance that he is heading. However, with these latest actions it looks like not only does he have control, but he is also fulfilling his Right-wing commitments. It would be interesting to see how long the ideologically opposite alliance partners will let him do what he wants to do.

Hamas has used the launching of incendiary devices in order to keep pressure on Israel to move along with reconstruction efforts in the Strip. However, these latest responses will make it way more difficult for Hamas to muster up the courage to do these actions again.