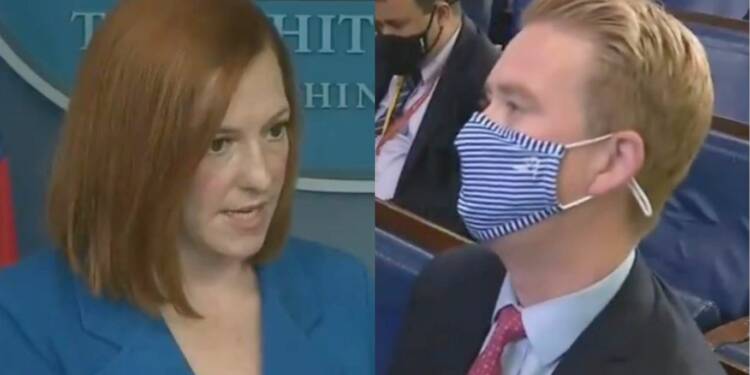 The one thing Democrats do not like is counter questions and journalists who remain persistent for reasonable explanations. And the one at the forefront of these questions has been Jen Psaki, the White House Press Secretary. And as things panned out, Fox News White House correspondent Peter Doocy destroyed her like a legend and reduced her to a mumbling mindless dullard.

With one last White House press briefing before the Fourth of July weekend, Fox’s Peter Doocy arrived prepared Friday afternoon with questions for Press Secretary Jen Psaki about her gaslighting on defunding the police, negative stories about Vice President Kamala Harris’s staff, and a widely-panned White House tweet urging Americans to celebrate the 16-cent decrease in food prices by throwing a bash.

Starting with the hot dogs tweet, Peter Doocy closed out his turn with a question about the tone-deaf tweet that ignored the fact that Americans are paying more for gas (which Psaki would acknowledge a few minutes later): “[T]he official White House account tweeted yesterday: ‘The cost of 1/4 of July cookout was down 16 cents from last year.’ 16 cents?” Psaki didn’t hesitate in showing her Acela Corridor elitism, bragging that “there has been a reduction in some of the costs of key components of the Fourth of July — a Fourth of July barbecue. That was what the tweet was noting.”

“I would say, if you don’t like hot dogs, you may not care about the reduction of cost. You don’t have to like hot dogs,” Psaki replied, adding that Biden’s “Build Back Better Agenda” continues to produce its intended results.

However, the Bureau of Economic Analysis released data this month showing that overall food costs had risen 0.4 per cent since March – an entire percentage increase over this time last year.

Beef and pork, the most frequent foundation meats in BBQ, have suffered significant price increases in the last year, with beef growing by more than 3% and pork increasing by 2.6 per cent, according to the bureau. Furthermore, some experts expect a probable scarcity of propane and propane tanks, which are used to heat not only barbeque grills but also pools and mountain lodges as Americans travel outside to enjoy the summer.

Rewind to the beginning of Peter Doocy’s slot, and he began with a series of stories in establishment, liberal media sources about the Vice President’s allegedly unorganised, haphazard, and toxic work atmosphere.

Psaki, who worked at CNN prior to joining the Biden team, refused to engage because “I try not to speak to or engage on anonymous reports or anonymous sources” as Harris “has a challenging job, a hard job, and she has a great supportive team of people around her.” Peter Doocy also attempted a third round of sparring with the administration over the administration’s bogus claims that Republicans are the party that has been (and continues to be) defunding the police.

“You say the President does not want to defund the police. But is the President concerned then that, last year, the now associate Attorney General Vanita Gupta said it was, ‘critical for state and local leaders to heed calls from Black Lives matter and Movement for Black Lives activists to decrease police budgets,’” asked Doocy.

If this were a Trump administration briefing, you could guarantee CNN and MSNBC would spend a few segments fact-checking Psaki and condemning the government’s lies. However, because their pals are in positions of power, they moved quickly.