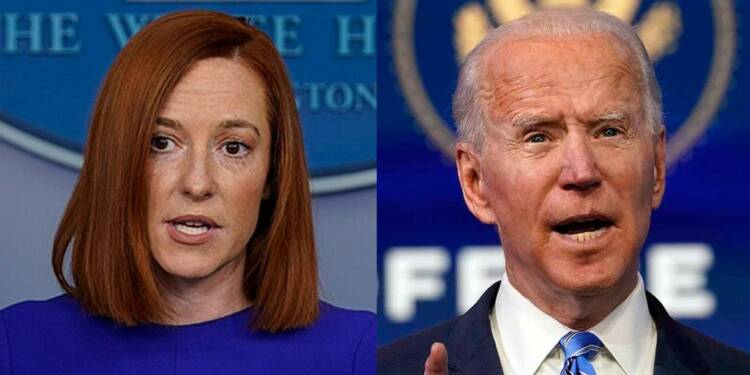 During her press briefing on Wednesday, White House press secretary Jen Psaki reaffirmed her claims that Republicans are to blame for defunding the police. Psaki was pressed on her comments from Monday, when she said that Republicans were essentially trying to steal monies from law enforcement across the country by voting against President Biden’s $1.9 trillion American Rescue Plan.

Democrats are now realizing that the progressive’s approach on crime is political poison. As crime rises to levels not seen in decades, public trust in Black Lives Matter is eroding, while support for police is increasing. Democrats understand that they cannot pursue their agenda, however, they cannot just reverse their claims and they have tried to tie the GOP with the maligned cause as they refuse to support Biden on his infrastructure plan.

Psaki responded by saying: “Well, first let me just note that the president ran and won the most votes of any candidate in history on a platform of boosting funding for law enforcement. Republicans spent decades trying to cut the COPS program. There’s record of that. That doesn’t require anyone having new comments. And then also stood in the way of crucial funding needed to prevent the laying off of police officers as crimes increased. That’s a simple statement of fact.”

“I think most people would argue that actions are more important than words, wouldn’t you say?” Psaki said.

Doocy pressed the issue further, asking when Republicans clearly stated that they planned to eliminate funding for officers.

“Again, I think actions speak louder than words, Peter, so if you oppose funding for the COPS program, something that was dramatically cut by their prior administration and many Republicans supported, and then you vote against the bill that has funding for the COPS program, we can let other people evaluate than what that means. It doesn’t require them to speak to it or to shout it out, their actions speak for themselves.”

Senator Ted Cruz of Texas blasted Democrats on Tuesday night for attempting to accuse Republicans for wanting to defund the police as ‘chutzpah’. “I gotta say, it’s remarkable that the White House is now apparently employing comedians,” he told Fox News’ ‘Hannity’, Tuesday night. “You know, there’s an old Yiddish word for that: chutzpah. For them to come out and claim that it’s Republicans who want to defund the police, that’s like an arsonist showing up at the fire and blaming the firemen,” Cruz said. “That’s like the Chinese blaming the Americans for the Wuhan virus. That’s like OJ [Simpson] saying he’s gonna help find the real killer.”

After the May 2020 murder of George Floyd by Minneapolis police officer Derek Chauvin, a left-wing rallying cry to defund the police escalated, and progressives like Alexandria Ocasio-Cortez joined in.

Psaki said on Monday that Republicans were behind the push to defund the police since they voted against the $1.9 trillion proposal in March, despite the fact that it included $350 billion for state and local governments, which could be utilised for local police. Despite every Republican in Congress voting against it, it was signed in March. Doocy had asked Psaki on Monday how one of Biden’s advisers, Cedric Richmond, could argue that Republicans defunded the police by refusing to support the American Rescue Plan.

“But how is it that that is an argument to be made when the president never mentioned needing money for police to stop a crime wave when he was selling the American Rescue Plan?” Doocy asked.

Psaki replied: “Well, the president did mention that the American Rescue Plan, the state and local funding, something that was supported by the president, a lot of Democrats who supported and voted for the bill, could help ensure local cops were kept on the beat in communities across the country.”

The anti-police rhetoric of progressives did not benefit Democrats among people of colour; in fact, it hindered them. Last November, the ‘defund the cops’ campaign, according to data researcher David Shor of New York magazine, drove Hispanic voters away from Democratic politicians. He stated, “We elevated the importance of an ideologically charged topic on which millions of non-white voters disagreed with us.” According to a Manhattan Institute poll, only 17 percent of Black New Yorkers want to see fewer police officers in their areas, while 62 percent want to see more policing of quality-of-life issues like graffiti and public urination.

Few Democrats and progressives dared to say it a year ago. However, a spate of deadly riots and the highest murder rate in 60 years have served to highlight the political stakes. Which is why a pro-law-and-order hardliner is running for mayor of New York, and why the ‘defund the cops’ movement is likely to expire because Democrats no longer want to be linked with it.

‘It’s an abusive environment,’ Kamala Harris’ disgruntled staffers reveal how it’s like to work under the VP