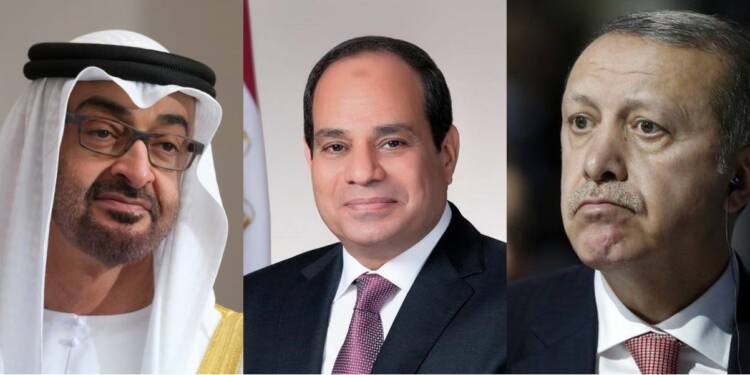 Every country is preparing to take on Turkey – ruled presently by wannabe caliph Recep Tayyip Erdogan. Turkey has some very nefarious plans, and it has been showing expansionist signs for quite some time now. Erdogan has grown a voracious appetite for conflicts, and also for the natural resources found in the Mediterranean Sea.

Turkey has been bullying Greece and Cyprus in order to lay its hands on their resources, while it is also making use of a puppet regime in Libya to further expand its dominance over the Eastern Mediterranean. However, Egypt has taken a major step to counter growing Turkish aggression.

Egyptian President Abdel Fattah al-Sisi inaugurated a large naval base on Saturday, 135 kilometres from the border with Libya. This is the latest step which Egypt has taken to confront Turkish influence in Libya and respond to Ankara’s refusal to withdraw its forces and mercenaries from Tripoli. Named as the “Third of July” military air and naval base, the port marks the day Egypt’s current President overthrew the Muslim Brotherhood government from Cairo in 2013. Considering the fact that Turkey supports a Muslim Brotherhood government in Libya, Egypt is sending quite a resounding message to Ankara with the opening of the new military base.

What makes Turkey the collective target of anti-Muslim Brotherhood forces in the region is the fact that UAE crown prince Sheikh Mohammed bin Zayed al-Nahyan was present for the opening of their new Egyptian base, along with Libya’s National Unity President. The Third of July base is spread over more than 10 sq. km and has a 1,000-metre naval quay with a water depth of 14 metres. It also has quays for commercial shipping.

Turkey supports an Islamist regime in Libya. This is the Government of National Accord (GNA), which is holding the fort in the capital city of Tripoli and making significant gains against the rival Libyan National Army (LNA) led by General Khalifa Haftar. The GNA controls western Libya and the capital city of Tripoli, while the Haftar-led LNA has its stronghold in eastern Libya – bordering Egypt.

Egypt, UAE and European powers support the Haftar-led LNA, and ideally, would want the General to take control over Libya – since he is not a Turkish stooge, unlike the GNA. While Turkey and Qatar are rooting for GNA, Haftar’s LNA has the backing of the United Arab Emirates, Saudi Arabia, Russia, and Egypt. Despite a UN arms embargo on Libya, Turkey has been sending reinforcements and even Syrian mercenaries in order to enable the GNA to push back the forces of General Khalifa Haftar.

Read more: It is UAE, Egypt, Saudi Arabia vs Turkey now – How the Libya War has divided the Muslim World into ‘Good Muslims’ and ‘Bad Muslims’

With the new military base, Egypt, along with its allies backing an LNA government in Libya has taken a massive step towards ensuring that a Muslim Brotherhood government does not take absolute control over the war-torn country, and General Haftar stands a good chance of riding to power in Tripoli. Besides, Egypt is also trying to secure itself and the Eastern Mediterranean from Turkey’s expansionist manoeuvres.

Tensions over the gas fields in the region have simmered for years but escalated when Turkey signed a deal with Fayez al Serraj’s GNA to set up shared maritime borders in 2019. If Turkey gains control of Libya’s waters, it would essentially be able to dominate the southern Mediterranean Sea, to the detriment of European nations and Egypt.

So, in opposition to the deal, a declaration was signed in May by a combined bloc of Cyprus, Egypt, France, Greece, and the UAE denouncing Turkey’s illegal drilling efforts around Cyprus, its military intervention in Libya, and its maritime borders deal with the GNA. Besides, Egypt and Greece also signed a maritime agreement last year designating an exclusive economic zone in the eastern Mediterranean between the two countries. According to Greek officials, the EEZ deal with Egypt has effectively nullified the accord between Turkey and GNA of Libya.

UAE, which has for so long been providing outward support to the Haftar-led LNA now seems determined to enter the thick of the conflict, which is why crown prince Sheikh Mohammed bin Zayed al-Nahyan was himself present for the opening of the new Egyptian military base. The Libyan war seems to be entering a decisive stage, and Turkey’s interests are about to take a massive hit.

The Algeria files: China is cushioning itself before Russia lands a shattering punch