It is UAE, Egypt, Saudi Arabia vs Turkey now: How the Libya War has divided the Muslim World into ‘Good Muslims’ and ‘Bad Muslims’

Wannabe Khalifas all around 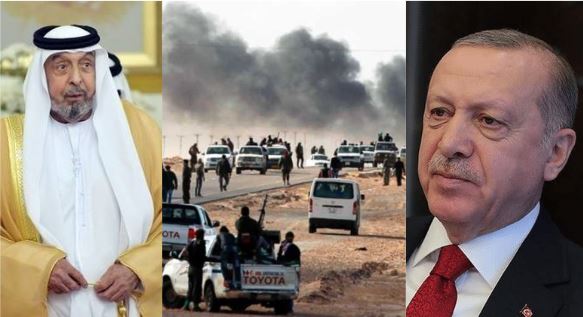 Egypt has recently come up with an initiative that calls for negotiations in Geneva and the exit of all “foreign mercenaries” from Libya. This Egyptian initiative has the support of Saudi Arabia, the UAE, Russia, Jordan and Bahrain. This move is aimed directly at Turkey which stands on the other side of this Islamic block in battlefields of Libya.

The Libyan War continues to divide the Muslim world with different factions emerging and going toe-to-toe with one another. The internationally recognised Government of National Accord (GNA) is holding the fort in the capital city of Tripoli and making significant gains against the rival Libyan National Army (LNA) led by General Khalifa Haftar. The Haftar led GNA has a strong presence in the west and holds most of the territory, and LNA has a strong hold in the east as it controls the capital region and many strategic assets.

While Haftar is being viewed by the world as a better leader, the GNA offers a highly Islamist regime and this is where the Muslim world stands divided.

Despite a UN arms embargo on Libya, Turkey, by sending reinforcements and largely Syrian mercenaries has enabled the GNA to push back the forces of General Khalifa Haftar.

While Turkey and Qatar are rooting for GNA, Haftar’s LNA has the backing of the United Arab Emirates, Saudi Arabia, Russia, and Egypt and even though he has lost considerable ground in the last few months, the coalition is pushing him to continue with the conquest.

Tensions over the gas fields in the region have simmered for years but escalated when Turkey signed a deal with Fayez al Serraj’s GNA to set up shared maritime borders last November. If Turkey gains control of Libya’s waters, it would essentially be able to dominate the southern Mediterranean sea, to the detriment of European nations including Turkey’s disillusioned neighbours Greece and Cyprus.

So in opposition to the deal, a declaration was signed in May by a combined bloc of Cyprus, Egypt, France, Greece, and the UAE denouncing Turkey’s illegal drilling efforts around Cyprus, its military intervention in Libya, and its maritime borders deal with the GNA.

While the UAE goes on an offensive against Turkey, the West has been seemingly unwilling to step into the mess, at least this time. Although the official line of European Union coincides with that of the UN but Mediterranean countries like Italy and France have their own vested interests here.

Italian PM Giuseppe Conte had met Haftar in January this year. Rome sees Haftar as crucial in stemming the flow of African and Arabic refugees and migrants to Italy. Reports have also claimed that France has sent covert military help to LNA. France is wary of terrorism and has some other interests (like Oil fields) and therefore its stance has put it at odds with that of the EU’s position.

Ties between Turkey and the UAE have been strained in recent years, particularly over Ankara’s support for Qatar after four Arab countries, including the UAE, imposed sanctions on Doha in 2017 over its independent foreign policy.

The Islamic bloc has a reason to dread the Muslim brotherhood if it again gains power in the unstable region. When popular protests flared across the region in 2011, the UAE and Saudi managed to cull them, but Egypt served as an example of the threat the Muslim Brotherhood could pose to their mode of absolute rule.

After President Mubarak was overthrown in 2011, a government dominated by the Muslim Brotherhood took shape which threatened the powerful position of the military. It took a lot of planning and effort to take down the regime.

The fear of resurgent Islamist terror that originates from the Muslim Brotherhood is a global threat that the world should be wary of and therefore it is rather a necessity that Turkey’s advances be kept in check. At this point, Turkey has all but won this war but that can be reversed in time.

The continuous war in Libya has put a lot of strain on Turkey’s finances which has massive international debts. The onslaught of COVID-19 pandemic has further worsened its economy. Thereby, UAE, having a sovereign wealth fund of more than $800 billion is willing to play the waiting game. The UAE shall wait for Turkey to submit itself without pinning it down.

If General Khalifa Haftar has been able to stay put for so long, it is because of the massive funding from the UAE.

This whole war has expanded beyond the realm of a military battle. Both UAE, Turkey and Qatar see this regime change war as an ideological war.

Turkey’s President Recep Tayyip Erdogan and Qatar both are ideologically related to the political Islamist movement of the Muslim Brotherhood. Meanwhile, the Islamic bloc of the UAE, Saudi Arabia, and Egypt fears the Brotherhood’s social-revolutionary orientation and its inclination towards Islamic terrorism. Also while Turkey wants to reinvigorate the memory of the Ottoman Empire, which in its time led most of the Muslim world, the now wealthy and influential petrol-driven Arab nations, are not so much on board.

This war has in fact turned into a ‘good Muslim’ vs ‘bad Muslim’ fight as recently, Turkey started with a twitter campaign with the hashtag ‘BoycottUAE’ interestingly aided by the Pakistani social media users. Here, the UAE was being accused of siding with Hindus of India and the Jews of Israel, despite being a Muslim nation. Wherever the Libya war is heading, it will continue to deepen differences in the Muslim world.