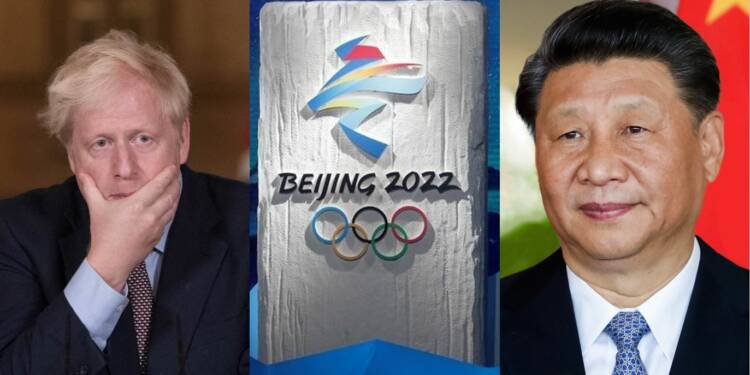 Boris Johnson, the right-wing strong man who ostensibly stood strong against Chinese belligerence earlier this year, is seemingly getting prepared to be taken on a ride by Chinese President Xi Jinping. When asked about UK’s stance on Winter Olympics being held in China’s Beijing next year, Boris brazenly denounced the idea of boycotting the games altogether. This comes after Jinping threatened that anyone attempting to “bully” China will “have their heads bashed bloody against the Great Wall of steel” last week in a fiery speech.

Conservative MP Tim Loughton had asked Johnson to support the motion calling for a diplomatic boycott of the event. However, Loughton’s call was unexpectedly brushed aside by the Prime Minister. Boris made it clear that he was not in support of boycotting the Beijing Olympics. “I will certainly consider that, the proposals debated, but I must say that I’m instinctively and always have been against sporting boycotts”, he answered.

The cross-party motion calling for the diplomatic boycott of the games was tabled by former Conservative Party leader Sir Iain Duncan Smith, who has been sanctioned by the Chinese regime for his outspoken stance against Chinese infringement of Human Rights in Xinjiang and other regions. Apart from seeking a diplomatic boycott, the motion also urged the government to “discourage” companies from sponsoring the games and asks individual athletes to “think carefully” about whether or not they should attend. Though, Boris seemed unamused over the demands of fellow parliamentarians.

Not just that, it’s happening right under the nose of Boris Johnson administration that China is sneakily slurping the UK’s largest chip facility to secure additional capacity amid a global semiconductor supply crunch. China-based Wingtech revealed on Monday that it has agreed to buy the loss-making Welsh facility from its owner, Neptune 6, which builds automotive-grade semiconductors. The move, if left unhindered by the Boris administration, might prove to be detrimental to the efforts previously made by the USA’s former Trump administration in order to choke China’s crucial supply chains.

Earlier this year, Boris Johnson ambitiously courted the support of 10 major democracies of the world, under the framework of the D-10 group, to deter China’s increasingly cynical attitude towards global order. Moreover, Britain’s biggest foreign and defence policy review since the 1990 end of the Cold War set out how PM Johnson wanted to be at the forefront of a reinvigorated, rules-based international order based on cooperation and free trade. His newfound love for China, however, is letting down his supporters at home and abroad while bolstering China’s malice at once.

Read More: A parallel Quad and now friendship with Russia: What is Boris Johnson up to?

Instead, considering the fact that the Johnson administration is actually going berserk against Cold war-era adversary Russia makes one realize that Boris Johnson’s commitment towards the containment of China’s rise could be heavily compromised. According to the media reports, Boris Johnson himself directed the British Navy’s HMS Defender to sail through Crimean territorial waters on its way to Georgia, in a shockingly confrontational move against Russia. Russia, however, didn’t shy away from giving it back to the UK by bombarding the path of HMS defender that immediately made the UK navy regret its decision.

Read More: Boris Johnson gets exposed as a gigantic fool as stories about UK’s Russia misadventure get released

Post Brexit, UK has been left exposed to its adversaries owing to its decrepit volatility. China’s attack on the idea of “Global Britain” has intensified in the past few months. Without EU’s support and Trump’s backing, Boris Johnson is succumbing profusely to Jinping’s diktats. If Boris Johnson wants to steer his country away from China’s tightening grip, he needs to shred off his apprehension to take China head-on.