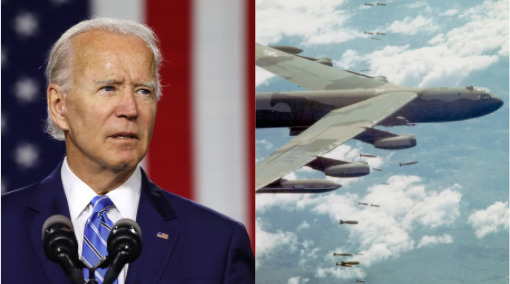 President Joe Biden, hiding behind the July 4th Independence Day celebrations, on July 2nd evaded inquiries from reporters regarding US objectives in Afghanistan. Nonetheless, he hinted that the US will utilise “over-the-horizon” air operations, including drones and manned aircraft, possibly including B-52s, to prevent the Taliban from gaining power. This means that the United States under Biden, which had reluctantly agreed to pull out troops from Afghanistan, is still going to bomb the country.

After Joe Biden assumed the office of the President of the United States, he made several decisions which were in complete contrast to the actions of his predecessor. One of them was the decision to pull troops out of Afghanistan. While former President Donald Trump had ordered the pullout of all US troops from Afghanistan by 1st of May 2021. Biden dillydallied on the decision after having been first opposed to it and then reluctantly gave the go ahead to pull troops. But his comments to reporters on the 2nd of June are proof that Biden is not yet ready to leave the war ravaged country.

At the close of his comments on the June 2021 jobs report, Biden was asked a series of questions regarding his policy and future plans for America’s role in Afghanistan. He was asked “Are you worried that the Afghan government might fall?  I mean, we are hearing about how the Taliban is taking more and more districts.”

Biden answered, “Look, we were in that war for 20 years.  Twenty years.  And I think — I met with the Afghan government here in the White House, in the Oval.  I think they have the capacity to be able to sustain the government. There are going to have to be, down the road, more negotiations, I suspect.  But I am — I am concerned that they deal with the internal issues that they have to be able to generate the kind of support they need nationwide to maintain the government.”

To which a follow-up question was being asked when Biden interrupted the reporter saying, “I want to talk about happy things, man.”

But still, the journalist persisted, “If there is evidence that Kabul is threatened, which some of the intelligence reports have suggested it could be in six months or thereabout, do you think you’ve got the capability to help provide any kind of air support, military support to them to keep the capital safe, even if the U.S. troops are obviously fully out by that time?”

To which Biden replied, “We have worked out an over-the-horizon capacity that we can be value added, but the Afghans are going to have to be able to do it themselves with the Air Force they have, which we’re helping them maintain.”

When the President speaks of “over-the-horizon capacity that we can add value to,” he is referring to a plan to fly drones and manned attack aircraft from bases as far away as Qatar, the United Arab Emirates, and Kuwait to assist the current Afghan central government in defending itself against the Taliban. The plan is estimated to cost $10 billion.

His comment is the first acknowledgement that the Taliban will be targeted by “over-the-horizon” air operations, which are expected to rely primarily on drone assassination and drone targeting of manned aircraft.

In a congressional testimony in June, Defense Secretary Lloyd Austin said that “over-the-horizon” operations would focus on “elements that can possibly conduct attacks against our homeland,” suggesting Al Qaeda and ISIS as targets but not foreclosing attacks against the Taliban.

The President’s remarks about “over the horizon” as “value added” flowing into “but the Afghans will have to be able to do it themselves with the Air Force they have” are reminiscent of former President Richard Nixon’s attempt to argue that the puppet government of Vietnam was developing the power to defend itself, attempting to cover U.S. tracks out of the horribly disastrous U.S. colonialization of Vietnam.

Read More: So you thought that Biden is bringing back every single American from Afghanistan, you’ve been lied to

While reports in the New York Times and Foreign Affairs said there has been an apparent reduction in US drone attacks, Biden fully intends to continue US drone attacks though at a reduced level. President Biden’s “value-added” remark sends a clear message: despite discussion of a more humane drone assassination strategy and stopping “forever” wars, the president has decided that prolonging the Afghan civil war is in the US’s best interests.

And why would he not think so? Biden represents the infamous war lobby active in Washington DC. He forms a part of those elitists who kept the Afghanistan war and other conflicts alive, in order to keep the military-industrial complex running.

Therefore, even though he was unable to keep the troops in Afghanistan because of what would have been a politically infamous decision, but by leaving the door open for using B2 bombers over Afghanistan Biden has kept the US actively involved in a war which has been going on for over 20 years and shows no signs of ceasing.