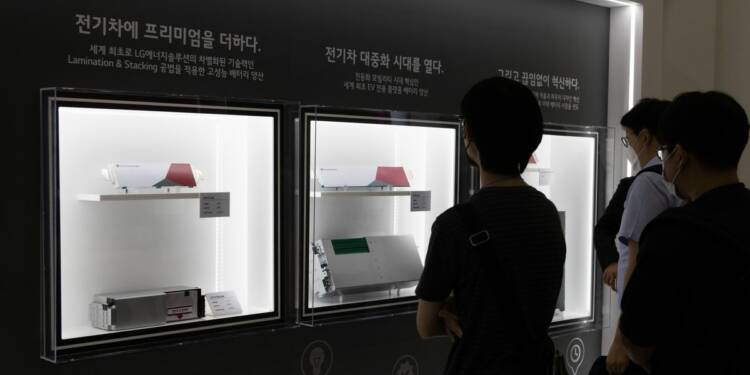 China has been building its high-tech sector by the process of reverse engineering and coupling it with the large-scale manufacturing capacity that can become a competitive option to its alternatives. However, it is now facing competition from countries all around, and the latest challenge comes from South Korea. While China was planning to become the global electric Vehicle monopoly market, South Korea has hit it with a speed breaker. South Korea intends to invest 40.6 trillion won ($35 billion) in its electric-vehicle battery industry by the end of the decade in order to compete with China as a significant global player in the sector.

South Korea boasts some of the world’s largest manufacturers of electric vehicle batteries, accounting for a third of the global market in the first five months of this year, and companies are expanding and adding facilities overseas to meet the rising demand for EVs. According to the government, their capacity would nearly double to 217 gigatonne-hours (GWh) in 2020, up from 59 GWh in 2016. The Korean government stated on Thursday that LG Energy Solution Co., SK Innovation Co., and Samsung SDI Co. will be significant participants, boosting investment in research and development and battery production.

“The plan is to ensure that incentives are provided to companies for their investments and R&D to help them become global leaders in the battery market,” it said. “The government will make all efforts to support and grow this industry, which will be a vital part of the country’s future economy.”

Earlier, the development of Chinese companies and their gaining technological capabilities to replace Tesla have given the CCP the reason to start the phase-wise dismantling of Tesla from the Chinese market. Tesla has not commented on The Information’s report, which cited an unidentified person familiar with internal data. China’s Passenger Car Association will release information next week about sales for May. The group said last month that Tesla’s sales of locally made vehicles dropped more than a quarter in April from March. Of the 25,845 vehicles sold, more than half were exported, as per the Bloomberg report.

Geely, the owner of Volvo Cars and 9.7% of Daimler AG, will roll out models under the new marque based on its open-source EV chassis, announced in September and called Sustainable Experience Architecture (SEA), the sources said. It will be a new attempt to go up-market by Geely and backs founder and Chairman Li Shufu’s long-held ambition to make premium cars “like Mercedes-Benz” in a bid to take on EV leader Tesla Inc. While all these efforts have been in the making for a long time, it seems South Korea has plans to put speed breakers.

Read more: Elon Musk’s love for China cuts Tesla’s sales to half as Jinping pulls the plug on EV company

In a statement, LG Energy stated that it intends to invest 15.1 trillion won by 2030, including 9.7 trillion won in R&D. It plans to construct a battery technology training institute in South Korea, with a completion date of January 2023. According to the corporation, it has a backlog of EV battery orders totalling more than 180 trillion won.

The administration of President Moon Jae-in has stated that it will assist enterprises in creating next-generation products, such as solid-state batteries. An 80 billion won fund will assist small and medium-sized businesses in improving their ability to supply battery-making materials and components. The fund will be funded by the government, financial institutions, and the three battery manufacturers. South Korea intends to expand its used-battery industry as well.