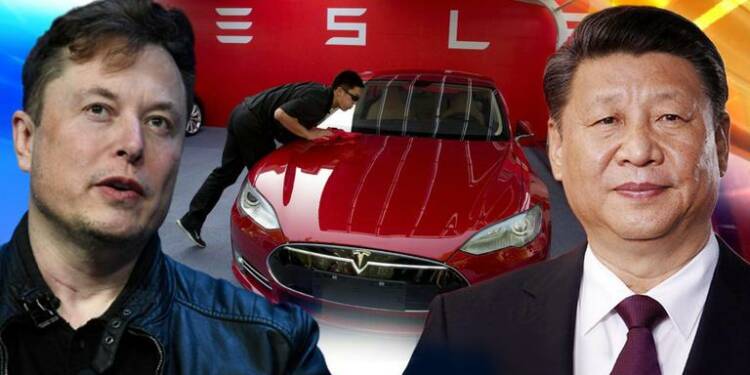 Elon Musk has been very confident in all of his investments, however, his investment and plans to set up manufacturing in China seems to be turning into his unbecoming. Tesla Inc’s vehicle orders in China nearly halved in May, when compared to April, against the backdrop of increased government scrutiny on the U.S. electric carmaker, the Information reported on Thursday, citing internal data.

Tesla shares dropped more than 5% Thursday after a report said the company’s vehicle orders in China steeply declined last month. The Information, citing a single source familiar with the data, wrote that Tesla’s “monthly net orders in China dropped to about 9,800 in May from more than 18,000 in April.” This has come after the CCP has started a negative PR campaign against Tesla and Xi Jinping pulls the plug on the EV company, after the CCP has copied the technology necessary and has developed homegrown brands.

Months of local media emphasis on Tesla’s vehicles’ safety and the company’s data collection and storage policies have prompted demand concerns. A Credit Suisse analyst said the company may wind up selling more cars from China to Europe after the tech website The Information revealed that net orders fell nearly in half last month.

If that happens, Tesla’s fortunes will take a sharp turn for the worse. Morgan Stanley’s Adam Jonas revealed that investors were toning back their enthusiasm for Tesla’s China prospects days after a customer protested the business from atop the roof of a Model 3 during the Shanghai auto show.

The U.S. electric car maker won strong backing from Shanghai when it built its first overseas factory there in 2019. Tesla’s sleek Model 3 sedans were the best-selling electric vehicle in the country before being overtaken by a much cheaper micro EV. This announcement came at a time when China’s Geely plans to roll out electric vehicles under a new marque with different branding and sales strategies, people familiar with the matter said, as the Volvo owner looks to take on its main EV rival Tesla with higher-end vehicles.

Read more: The phase-wise banning of Tesla in China is now underway. Phase one has already been completed.

Geely, the owner of Volvo Cars and 9.7% of Daimler AG, will roll out models under the new marque based on its open-source EV chassis, announced in September and called Sustainable Experience Architecture (SEA), the sources said. It will be a new attempt to go up-market by Geely and backs founder and Chairman Li Shufu’s long-held ambition to make premium cars “like Mercedes-Benz” in a bid to take on EV leader Tesla Inc.

The development of these companies and their gaining technological capabilities to replace Tesla has given the CCP the reason to start the phase-wise dismantling of Tesla from the Chinese market. Tesla hasn’t commented on The Information’s report, which cited an unidentified person familiar with internal data. China’s Passenger Car Association will release information next week about sales for May.

The group said last month that Tesla’s sales of locally made vehicles dropped more than a quarter in April from March. Of the 25,845 vehicles sold, more than half were exported, as per the Bloomberg report.

China represented last year the second-largest electric vehicle market in the world, according to IEA research. Tesla’s near-term growth hinges largely on its ability to make and sell cars successfully in China. However, with the latest development, Tesla is being handicapped in China and going ahead its fortunes will surely plummet.