Was the Haitian President assassinated by the CCP? 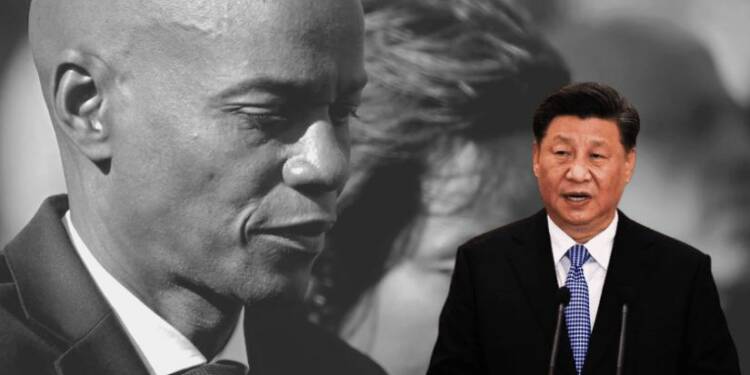 Haitian President Jovenel Moïse was assassinated in an attack on his private residence and his death was announced on Wednesday. The assassination of a sitting President and a failed attempt to take the life of his wife made immediate global headlines. Moïse – the 53-year-old President had been ruling by decree for more than two years after the country failed to hold elections, which led to the Haitian Parliament being dissolved. Within Haiti, gang violence has been spiking for quite some time now. Additionally, inflation has been spiraling and food and fuel becoming scarcer in a country where 60 per cent of the population makes less than $2 a day is commonplace.

Conventional wisdom would suggest that the slain Haitian President was probably assassinated by one of the many armed groups that have come to exist in the Caribbean nation. But we beg to differ. We think that the President of Haiti was assassinated as part of a well-thought plot to alter Haiti’s geopolitical, and foreign policy outlook. We also think that the assassination of Jovenel Moïse was a stringent message by a foreign power to Haiti – that their foreign policy outlook is not appreciated.

Just to put things in context, the Caribbean country of Haiti is one of Taiwan’s 15 diplomatic allies.

Meanwhile, the assassination of Haiti’s President came a day after Haitian ambassador Roudy Stanley Penn met Taiwanese President Tsai Ing-wen. Welcoming Penn on behalf of the Taiwanese government and people, Tsai pointed out that Haiti and Taiwan had marked 65 years as diplomatic allies in April. She noted that the cooperation between Taipei and Port-au-Prince has spanned the sectors of medicine, public health, education, and agriculture, adding that cooperation on infrastructure projects has also “yielded many results.”

Last year, late President Jovenal Moïse had called on the United Nations to allow Taiwan more international participation – being the free and sovereign country that it is. He made his case heard during his address to the 75th UN General Assembly. Now, we all know which country has a deep grudge for all foreign powers maintaining ties with Taiwan, don’t we?

Intriguingly, two days after the assassination of Haitian president Jovenel Moïse, 11 armed suspects tried to break into the Taiwanese embassy in Port-au-Prince. The suspects attempted to break into the embassy while Taiwanese diplomats were working from home. The embassy security guards alerted the police regarding criminal trespass. Subsequently, the Taiwanese Police allowed Haitian police to enter its premises, after which the assassination suspects were arrested.

Why would 11 armed suspects, just two days after the assassination of Haiti’s president, break into the Taiwanese embassy in the Caribbean nation’s capital? Was Taiwan being falsely incriminated? Was human evidence being placed inside the Taiwanese embassy which could connect the assailants to Taiwan? Haiti is one of just 15 official diplomatic allies that Taiwan has. As such, why would Taiwan assassinate its President? Surely it was not Taiwan.

Therefore, the question becomes, was a certain foreign power trying to make the world believe that the Haitian President was assassinated at the behest of Taiwan? Now, who could this Taiwan-hating foreign power be? Any guesses?

Meanwhile, Haiti – the poorest country in the Americas now has no president or working parliament and two men claiming to be in charge as prime minister.

Here’s some additional information. China, brutalised by the CCP regime has been trying to lure Haiti for a long time now – unsuccessfully so. In 2019, China tried to provide free assistance, interest-free loans, and concessional loans to Haiti. The condition? Haiti would have to uphold the ‘One China Principle’, which means it would have to sever all ties with Taiwan. If Haiti would just have broken ties with Haiti, China was ready to establish official diplomatic relations with it and improve cooperation in several areas, including politics, trade, public hygiene, and education.

China has been trying to convince Haiti for a long time to discard Taiwan, and hop on to the bandwagon of countries which follow the ‘One China Policy’. Haiti, however, has been steadfast in its support to Taiwan and has resolutely continued calling on the world community to recognise Taiwan and allow its participation world over. Perhaps, the Haitian President was taken away for advancing the cause of Taiwan globally.