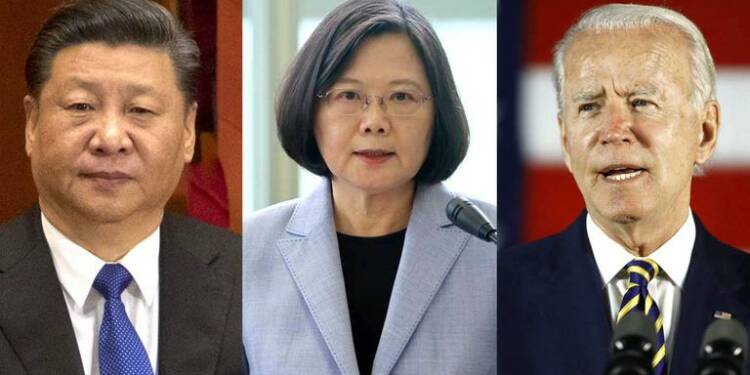 The Biden administration, right from the get-go has been too considerate to the Chinese Communist Party and its reservations. This is in extreme contrast to the way in which the previous Trump administration acted with their Chinese counterparts. In the latest event which may have been triggered by China expressing its reservations, the White House removed a tweet that included the flag of Taiwan. The White House characterised the deletion of a tweet containing an image of Taiwan’s flag by its COVID Response Team on Thursday as a “honest mistake,” while at the same time clarifying that the US is following One-China policy. If this is not an abject kowtowing to Chinese Communist Party then what is?

On Tuesday, the White House tweeted that President Biden had described the United States as an “arsenal of vaccines for the world,” and that Taiwan had been among the recipients of 40 million donated vaccine doses thus far. Taiwan’s flag was displayed next to the entry for Taiwan, which said that the country had received Moderna COVID-19 dosages on June 18, when 240,000 were delivered, in an image included in the tweet.

The following day, Taiwanese President Tsai Ing-wen retweeted the post and thanked the United States for its kindness, stating, “Together, we will conquer this pandemic.” However, on Wednesday, the White House tweet was suddenly deleted, leading many to a quite plausible speculation that it had been taken down for fear of angering China. These speculations made Taiwan Foreign Ministry spokeswoman Joanne Ou make a statement where she said that the ministry had noted that the Twitter post had gone down.

“Regarding the reason for the deletion of this tweet, as the media has different interpretations, the Foreign Ministry has asked the representative office in the United States to remind the United States not to cause unnecessary speculation or misunderstanding from all walks of life due to the removal of the related tweet,” she said.

Senator Ted Cruz (R-TX) accused the Biden administration of being soft on China on Thursday, while Taiwan’s Ministry of Foreign Affairs (MOFA) urged the US not to generate a “misunderstanding” after a White House tweet bearing the Taiwanese flag unexpectedly vanished on Wednesday.

“This was an honest mistake that was made by the team handling graphics and social media, and should not in any way be viewed as a shift in official US policy. When we recognized the mistake, we removed the tweet,” WH press secretary Jen Psaki said at the White House daily press briefing. This comes at a time when the United States’ Indo-Pacific coordinator, Kurt Campbell, has stated that the United States does not back Taiwan’s independence.

These actions by the US show abject retreat from its responsibilities in East Asia, and as many of the allies have realised these developments, they are working to create a ‘minus USA’ worst-case solution that can be relied upon. Japan’s Deputy Prime Minister Taro Aso has spelt out his country’s policy in the event of a Chinese invasion of Taiwan.

Japan is one of the biggest China hawks that has emerged in the past one year. Chinese aggression in the East China Sea and in the Senkaku islands has convinced Tokyo that Beijing’s intentions are devious, and that it must take a lead role in securing the region. In fact, even Australia’s Defence Minister Peter Dutton has shown willingness to get involved if China tries to mount an attack on Taiwan.

On the issue of Chinese aggression against Taiwan, Dutton said, “I don’t think it should be discounted. I think China has been very clear about the reunification and that’s been a long-held objective of theirs and if you look at any of the rhetoric that is coming out of China from spokesmen, particularly in recent weeks and months in response to different suggestions that have been made, they have been very clear about that goal.”

The issue has made it clear that the USA may leave Taiwan in a fix at the very moment when it will need the support of the USA. At a time, when the USA’s allies like Japan, Australia have vowed to defend Taiwan, the Biden administration seems to be cowing down to China.