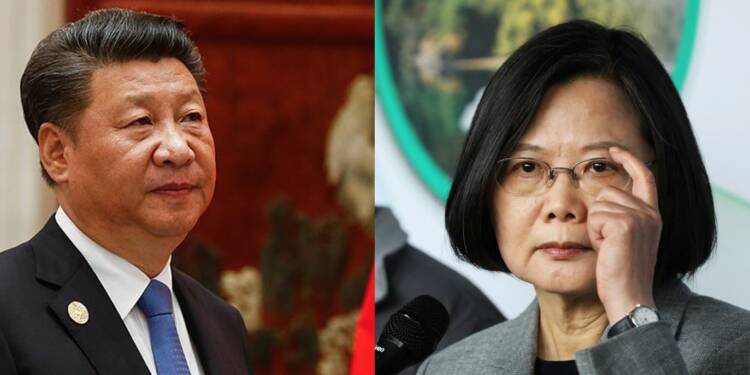 While delivering an exuberant speech at the glaring celebrations of the party’s centennial last week, Chinese president Xi Jinping declared that ‘reunification’ with Taiwan is a historic mission and an unshakable commitment of the Communist Party of China. In his latest speech on Taiwan, Jinping didn’t deviate from the idea of “Peaceful reunification” indicating China’s subdued stance on the island nation; not so long ago, however, a belligerent Chinese president had warned of using “military force” against Taiwan to reunite it with China. This remarkable shift in Jinping’s attitude towards the island nation speaks much of the sensitivity that surrounds the issue of Taiwan in China.

A senior China analyst Paul Monk, while highlighting China’s vulnerability pertaining to a military takeover of Taiwan, explains how ill-considered moves on Jinping’s part could lead to CCP’s own collapse. According to Paul Monk, “Xi has purged senior military ranks. While talk of an invasion of Taiwan has dominated, China may be more fragile militarily than we thought. Any difficulty in achieving the mission to invade Taiwan could end in its own regime collapse.”

The disillusion in the Chinese people for the CCP is well known, and the pro-democratic factions in China look up to Taiwan as a beacon for hope. Jinping’s toned-down version of anti-Taiwan rhetoric signals that a stringent Taiwan policy could be hard to pull off.

Moreover, in his bid to tighten control over the country, Jinping has had resorted to launching an intensive anti-corruption campaign resulting in the purge of high-ranking officials in the people’s liberation army or the PLA.  This has ruined PLA’s war-fighting prowess altogether. The PLA’s might was spectacularly exposed last year when the Indian Army dealt a bloody nose to the ill-experienced PLA personnel in the Galwan valley. Now if the PLA is entrusted with a far-consequential task of launching an attack on Taiwan and reunifying the island nation with force, it could even lead to widening of the disenchantment between PLA and the CCP that continues to simmer in hindsight.

Read More: 25 million CCP members quit the party due to coronavirus and a thousand other reasons

Also, owing to the significant shift in Australia and Japan’s Taiwan policy, China would stand at the risk of inviting their wrath given that China decides to take Taiwan head-on. Keeping the larger Indo-Pacific strategy in mind, Japanese Prime Minister Suga has warmed up to Taiwan as the island nation continues to face Chinese aggression, the worse being in the form of airspace violations by Chinese warplanes, keeping Taiwan’s defence forces on their toes constantly.

Japan and Taiwan – two sovereign, independent, democratic, and free countries are coincidentally partners in facing the same enemy – China. So, it would only make sense for both Taiwan and Japan to team up and counter growing Chinese belligerence in the region. That would involve relations between the two countries in the security and military realm – and on that count, ties between Tokyo and Taipei are flourishing. However, much to China’s dismay – Taiwan and Japan are now getting economically married, and the consequences promise to be catastrophic for Beijing.

Australia is also working upon a strategy to countervail any Chinese attack launched against Taiwan that could spark tensions all over the Indo-Pacific region.

Paul Monk in her conclusion has recommended the USA to be fully prepared to deal with a sudden disintegration of China. As TFI reported earlier, the Chinese people are increasingly growing disillusioned with Jinping’s treacherous policies and now taking to quit the Communist party en masse. Jinping’s ill-considered move to launch a scathing attack against Taiwan could provide anti-Jinping factions within PLA a fortune moment, and it could spell a devastating blow to the CCP regime altogether.