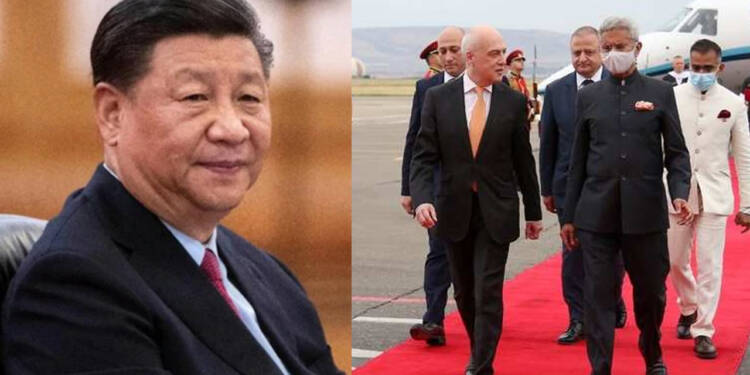 Georgians are today emotional and ingratitude. St. Queen Ketevan was killed in Iran some 400 years ago for refusing to give up her Christian faith and convert to Islam. From Kakheti, a kingdom in eastern Georgia, she was tortured and killed in 1624 in Shiraz during the rule of the Safavid dynasty. In Georgia’s capital Tbilisi on Saturday, India’s Dr S Jaishankar handed over part of the relics to its government and the people at an emotional ceremony.

Jaishankar also invited his Georgian counterpart to India with a business delegation. The Indian Foreign Minister said, “We discussed economic cooperation, tourism, trade and connectivity. Our relationship is doing well. There are some big Indian projects in Georgia, power projects and steel projects.” He added, “I think our very excellent relationship will even go to a higher level,” while saying that his visit to Georgia marks the opening of a new chapter in the relationship between the two countries.

Georgia is not just any other country. For India, it is of strategic importance. Georgia has the potential of playing an incredible role in helping India connect to Europe. Add to that, the fact that India is missing no opportunity to make countries realise the perils of associating with China is all the more reason why New Delhi hopes to win the trust of Tbilisi. Georgia, particularly, is deeply involved with China.

China has become one of Georgia’s top trading partners and also the main source for foreign direct investments into the former soviet state. Georgia has welcomed the Belt and Road Initiative (BRI) and is a signatory to the same – despite the fact that BRI is an international debt-trap racket run by Xi Jinping himself. In order to promote BRI in the Eurasian region, the Georgian Ministry of Economy and Sustainable Development and the Ministry of Foreign Affairs had also launched ‘Tbilisi Silk Road Forum’ with the support of the Chinese government and the Asian Development Bank.

Georgia is the only country in the region to have a free trade agreement (FTA) with China. After the FTA was signed in 2019, Chinese investments in Georgia have grown significantly. China is especially involved in Georgia’s construction sector. Massive amounts of money have been poured in by China. Around 90 per cent of the total $600 million invested in Georgia from China since the first-ever investment in 2002, came from the construction sector.

However, despite their deep economic ties, Georgia and China relations are undergoing a change. A sense of growing disenchantment is starting to dominate China-Georgia relations. According to Emil Avdaliani of the Washington-based Center for European Policy Analysis (CEPA), “The hopes for improvements in trade have not panned out. While there has been a steady increase in overall volume, statistics show that Georgia mostly exports raw materials to China, such as copper and various chemicals. A market for goods higher up the value chain has not materialized. Similarly, concerns over corrupt practices have increased, especially tied to how Chinese companies have been awarded contracts.”

Owing to the straining of ties between Georgia and China, India is seeking to benefit by enhancing ties with Tbilisi. Indian Foreign Minister, while handing out the relics of Queen Ketevan said, “The presence of some of the relics in India and Georgia is a bridge of faith between our two countries. I hope that in the coming years, the people of both of our nations will traverse that bridge of spirituality as much as of friendship.”

India is, thus, hitting the reset button in ties with Georgia on a strong footing. While Georgia grows wary of its ties with China, India is standing ready with a shoulder for the geostrategic country to lean on. By heightening ties with Georgia, India is all set to dismantle Xi Jinping’s BRI fortunes – in yet another country.

After ensuring the fall of Hong Kong, Carrie Lam is ensuring its intellectual death